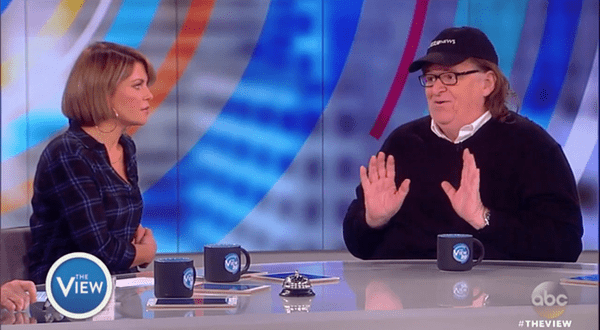 Moore explained that his film is less about Trump–what else can be said of the Republican nominee, he wondered–and more about why he is excited to vote for Hillary Clinton.

As RawStory notes, Moore said Clinton could have gutted Trump in the debates ever more than she did but didn’t because of her Christian faith.

“I think that’s because, honestly, when she says she’s a Christian, I think she means it and I think she lives it,” Moore conjectured.

He continued, “The people who talk about it, ‘I’m a Christian,’ you know, oftentimes aren’t. The idea of being a Christian is to just behave that way.”

Co-host Candace Cameron Bure interjected, “Not all of us!”

Moore praised Clinton for not bragging about her faith: “She doesn’t talk about it, she lives it. She acts it.”

However, Bure wasn’t in agreement: “With some of her positions, I don’t believe she lives it. For those people that really look to the Bible, it[understanding her positions is very difficult.”

Bure was seemingly hinting at Clinton’s stance on so-called social issues such as abortion and gay rights.