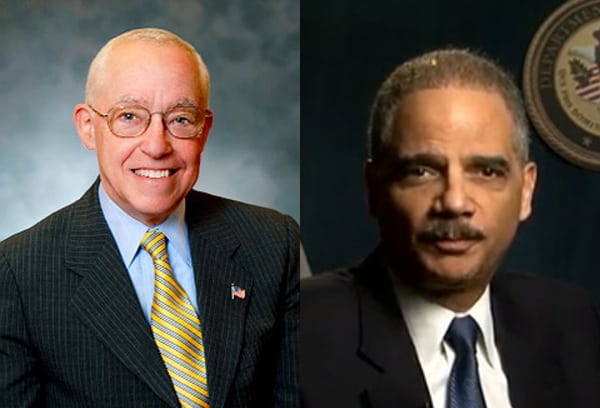 Former Attorneys General Eric Holder and Michael Mukasey blasted FBI Director James Comey for his politically-motivated letter to Congress regarding emails related to the Democratic nominee about which he had little additional information.

Wrote Holder in an op-ed in the Washington Post:

Director Comey broke with these fundamental principles. I fear he has unintentionally and negatively affected public trust in both the Justice Department and the FBI. And he has allowed — again without improper motive — misinformation to be spread by partisans with less pure intentions. Already, we have learned that the importance of the discovery itself may have been overblown. According to the director himself, there is no indication yet that the “newly discovered” emails bear any significance at all. And yet, because of his decision to comment on this development before sufficient facts were known, the public has faced a torrent of conspiracy theories and misrepresentations….

…In this instance, he has committed a serious error with potentially severe implications. It is incumbent upon him — or the leadership of the department — to dispel the uncertainty he has created before Election Day. It is up to the director to correct his mistake — not for the sake of a political candidate or campaign but in order to protect our system of justice and best serve the American people.

And Mukasey, who served under George W. Bush, penned a piece for the Wall Street Journal, via Politico:

Mukasey attacked Comey’s decision to recommend against charges for Clinton, poking an array of holes in his argument that “no reasonable prosecutor would bring such a case” but pointing to misdemeanor and felony charges that could have been leveled at the former secretary of state. Beyond that, Mukasey wrote, Comey’s “authority extends only to supervising the gathering of facts to be presented to Justice Department lawyers” and not to any decision of whether or not charges should be brought….

…Noting that Comey wrote to Congress over the objections of both Lynch and her deputy, Mukasey wrote that “regardless of what is in the newly discovered emails, the current Justice Department will not permit a grand jury to hear evidence in this case. And because only a grand jury can constitutionally bring charges, that means no charges will be brought.”

“Which is to say, we know enough to conclude that what we don’t know is of little immediate relevance to our current dismal situation,” he added.