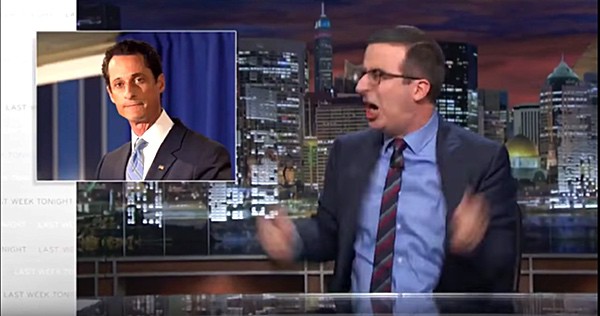 On Last Week Tonight, John Oliver went off on Anthony Weiner for refilling “the shit-filled cornucopia that just keeps on giving 2016.”

“So nine days out from the election the FBI has basically delivered us the equivalent of a mystery box, and like the box from the end of Seven, it could contain anything from nothing to Gwyneth Paltrow’s head, although it almost definitely contains Anthony Weiner’s penis, and the chances of getting this resolved before the election seem slim.”

“The grinding hell of this election has thrown in yet another twist with the election potentially hanging in the balance all thanks to the fact Anthony Weiner allegedly sexted with a 15 year old girl.”

And that leads us to where we are today, having thought we had hit rock bottom in this election weeks ago:

“We have burrowed through not just rock bottom, but through the core of the earth, and we’ve come bursting out the other side, startling kangaroos, and we’re currently hurtling toward outer space where there is no up, down, light, or darkness ― just an endless void in which death comes as sweet, sweet relief. Please let this thing be over soon!”