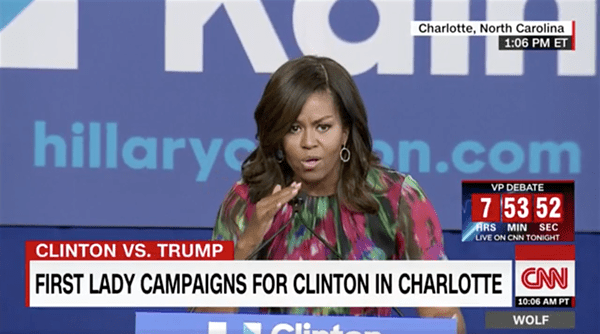 At a campaign rally for Hillary Clinton in Charlotte, North Carolina on Tuesday, First Lady Michelle Obama mocked Donald Trump for complaining about his microphone during the first presidential debate.

“Hillary Clinton is tough. See, I’ve watched her. When she gets knocked down, she doesn’t complain. She doesn’t cry foul,” Obama said tapping on her microphone, alluding to Donald Trump’s complaints last week that he was given a “defective mic.”

Obama added of Clinton, “She gets right back up, comes back stronger for the people who need her most.”

Michelle Obama: "Hillary Clinton is tough" … When she gets knocked down, she comes back stronger https://t.co/cWfzFKLZF7

RELATED – Hillary: ‘Anyone Who Complains About the Microphone is Not Having a Good Night’ – WATCH

Obama also went after Trump on the issue of his taxes, saying not paying taxes doesn’t “make you smarter than the rest of us.”

Michelle Obama on Trump tax issue: Not paying taxes doesn't "make you smarter than the rest of us" pic.twitter.com/2xIJnM9hsw