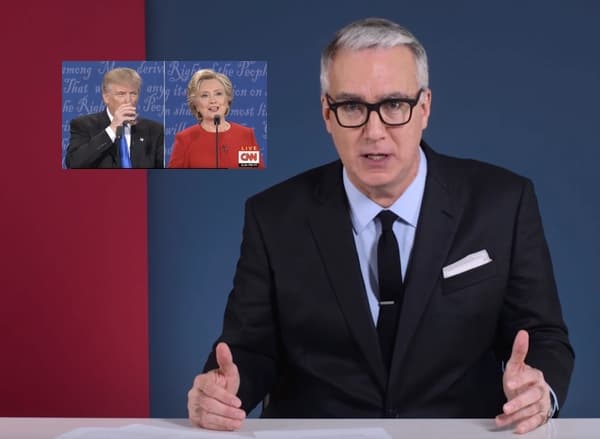 The second presidential debate takes place on Sunday night at Washington University in St. Louis at 9 pm ET and will be moderated by MArtha Raddatz and Anderson Cooper.

Keith Olbermann has a few ideas about what will happen.

Trump thinks he won the first debate, and needs to land a “historic punch”.

So what will that “punch” be about? Olbermann believes Trump has been previewing his tactics.

Will it be a strange claim about marriage infidelity on Hillary’s part? In Manheim, Pennsylvania this week, Trump floated one idea: “I don’t even think she’s loyal to Bill, if you want to know the truth. And really, folks, why should she be, why should she be?”

Will it be about making his tax avoidance her fault? In Prescott Valley, Arizona this week, Trump floated that idea: “She complains about how I’ve used tax laws of this country to my benefit. Then I ask a simple question: Why didn’t she ever try to change those laws so I couldn’t use them?”

Will it be a completely different “hallucination” about “race riots in the street?”

And Martha Raddatz has been previewing one of her questions, perhaps, on nuclear weapons:

“I think all of us at the table last night were saying, ‘He said what?’ We had no idea what he was talking about in the end, whether he wanted first use or whether he didn’t want any first use. Maybe that next debate. We’ll see.”

While Anderson Cooper has been praising Phil Donahue’s style of stepping back. Olbermann fears Cooper could be MIA.

One thing’s for sure: Trump is going to call Hillary a new name of some kind that he thinks will disqualify her.”

How do you think this will play out?