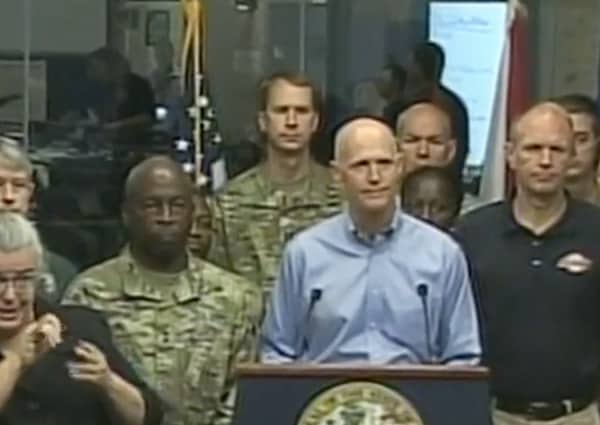 Florida Governor Rick Scott refused a request to extend voter registration in the state due to Hurricane Matthew, the Miami Herald reports:

“I’m not going to extend it,” Gov. Rick Scott told reporters in Tallahassee. “Everybody has had a lot of time to register. On top of that, we have lots of opportunities to vote: early voting, absentee voting, Election Day. So I don’t intend to make any changes.”

Clinton’s team had asked for more days earlier, after Democratic-leaning political groups said they had to cancel planned registration drives in the last frenzied days ahead of the deadline because of the storm. Tuesday is the last day for new voters to sign up ahead of the Nov. 8 presidential election.

…Elections supervisors typically see a surge in voter interest immediately before the registration closes. About 50,000 people registered during the final five days in 2012, according to University of Florida professor Daniel A. Smith, who studies Florida voting trends.

Scott quickly faced pushback. Speaking with MSNBC’s Chris Hayes, Florida Rep. Debbie Wasserman Schultz (D) said she and other members of the state’s congressional delegation would send a letter to Scott pressing him to extend the deadline from Tuesday to Friday.

“It’s clearly the responsible and essential thing to do, we have people who have been expecting to have a few extra days before that deadline to register to vote,” Wasserman Schultz said. “That’s the most fundamental right we have is to be able to register and cast our ballot to select our leaders and, you know, I certainly hope Gov. Scott will … reconsider.”

Here’s an ABC News update on the storm’s status from this morning:

Previous Post: « ‘RuPaul’s Drag Race All Stars’ Behind the Scenes: A Heartbreaking Family Moment
Next Post: Keith Olbermann Has a Few Predictions About Trump and This Sunday’s Second Debate: WATCH »