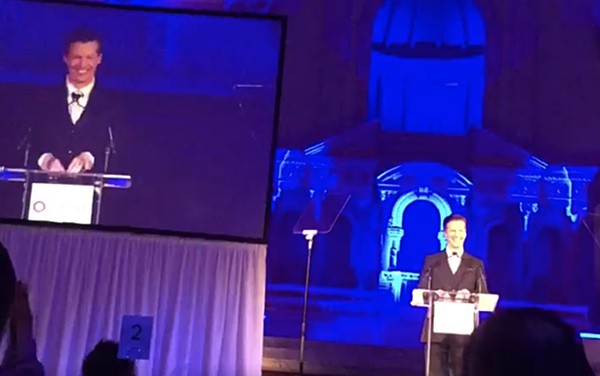 Will and Grace actor Sean Hayes was honored by Los Angeles LGBT film festival Outfest at its annual Legacy Awards. Hayes was honored as a Trailblazer, though at the time he was criticized because may people assumed he was a closeted gay man in real life.

And it was true. Hayes acknowledged that at the awards and said he is “ashamed and embarrassed” for not coming out sooner.

“[The press release] said that I took the stereotypical gay sissy and made him human, lovable, flawed and real. While this may be true, I think you should’ve led with flawed because at the time, I was a young closeted actor having his first taste of a little success and unfortunately, in my mind, my lucky break was inextricably tied to me thinking that I had to stay in the closet in order to keep moving forward,” Hayes said, receiving his award from longtime friend Dax Shepard, who was equal parts genuine and hilarious. “Looking back at my choice to stay silent, I am ashamed and embarrassed. What was I thinking? As If any of you had any doubts. I mean, right, could a straight actor ever do this…?”

“When it comes to nights like tonight and honors like this, I’m consumed with what I didn’t do. I know I should’ve come out sooner and I’m sorry for that. Especially when I think about the possibility that I might have made a difference in someone’s life. I would probably be able to sleep a lot better than I do if I had acted sooner, but such is life. We learn our lessons only when we are ready.”

@SeanHayes admits he is embarrassed 4 not coming out sooner, during Will & Grace fame, for he could've helped others. #LegacyAwards pic.twitter.com/ChCssFeRnU