As expected, this week’s third and final SNL presidential debate provided ample fodder for Kate McKinnon and Alec Baldwin, who were moderated this week by Tom Hanks’s Chris Wallace.

“It’s going to be a lot like the third Lord of the Rings movie,” said Hanks’s Wallace. “You don’t want to watch but, hey, you’ve come this far.”

“In the first debate, I set the table, in the second debate, I fired up the grill, and tonight, I feast.”

And she also brought out the skewers:

“Because what two better people are there to talk about women’s issues? Me, a woman who has had a child and has taken birth control, and him, a man who is a child, and whose face is birth control?”

She also brought her bingo card: 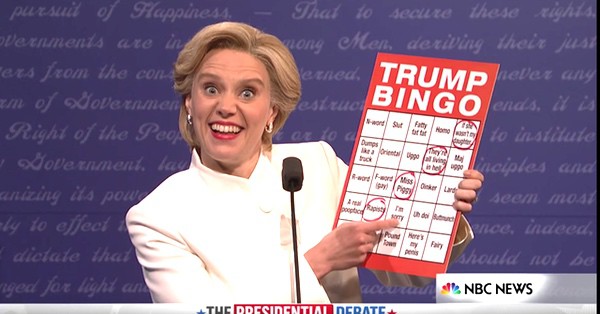 And finally, after Baldwin’s Trump proclaimed “Nobody has more respect for women than I do,” And Hanks had to quiet down the audience, the nation, the world: