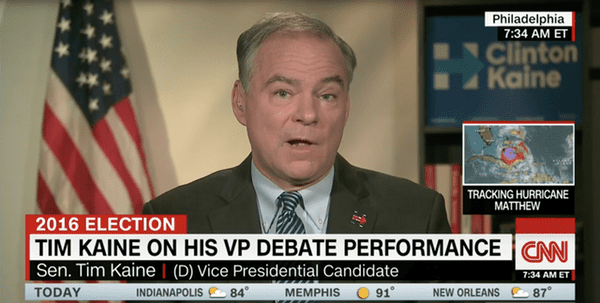 Democratic Vice-Presidential nominee Tim Kaine responded to critics of his debate performance on Thursday and explained why he didn’t challenge Indiana Governor Mike Pence on the issue of LGBT rights.

Kaine pointed out that moderator Elaine Quijano didn’t ask any questions about LGBT rights or Governor Pence’s record on the subject.

“Well, it is the case that there was no question that was asked that dealt with Governor Pence or just the issue of LGBT equality,” Kaine said.

“Hillary and I are strongly for LGBT equality, including marriage equality, and a Trump-Pence ticket is deeply against it, especially Governo Pence,” he added.

Kaine seemed to agree that he missed an opportunity to call out the governor on his LGBT record.

“That was an opportunity,” he said. He hinted that he wished an additional question would have been asked to extend the debate so as to pay heed to LGBT issues. Said Pence, “I would have loved to have had a 93-minute debate instead of a 90-minute debate. But I think that pundit who said that was probably accurate.”

Kaine said he didn’t go out of his way to mention Pence’s record on LGBT rights because he wanted to keep the focus squarely on Donald Trump:

Earlier today in an op-ed published in the Philadelphia Gay News, Hillary Clinton attacked Pence’s record on LGBT rights, calling him “one of the most anti-LGBT public officials in America.”

Watch Kaine talk about his debate performance, below.