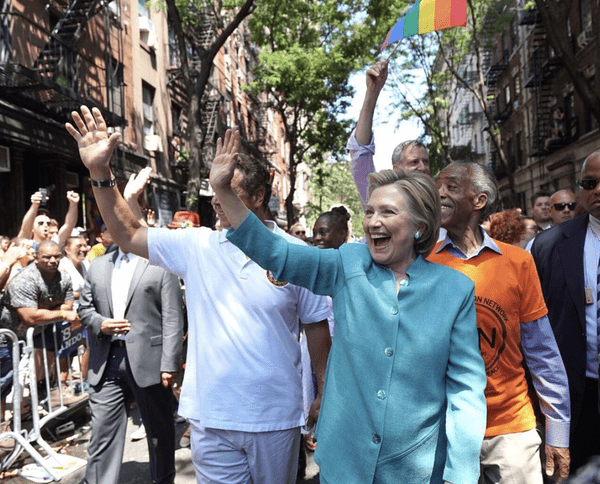 Hillary Clinton has become the first presidential candidate from a major party to pen an op-ed for an LGBT newspaper.

In a piece published in Philadelphia Gay News, Clinton outlined her record on LGBT equality and the goals she hopes to achieve if elected president.

While acknowledging the huge strides made for LGBT rights during President Obama’s tenure, Clinton writes,

…the simple truth is that even now, in 2016, there are still too many states in America where LGBT people can be fired or evicted from their home because of who they are or who they love. Pennsylvania is one of them. Here, you can get married on Sunday and fired on Monday, just for being gay or transgender.

That goes against everything we stand for as a country.

We need to act on the federal level to take on discrimination in all its forms. That’s what I’ll do as President — with your help. 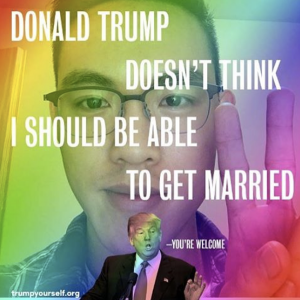 On the threat posed by Donald Trump to the LGBT community, Clinton says,

He would rip away so much of the progress we’ve made. He would appoint Supreme Court justices who would overturn marriage equality and rescind many of President Obama’s executive orders — including those protecting LGBT people.

Clinton also took on Mike Pence’s horrifying record on LGBT issues, calling him “one of the most anti-LGBT public officials in America”:

As governor of Indiana, Pence supported a bill that legalized discrimination against LGBT people. As a member of Congress, he voted against expanding the definition of hate crimes to include sexual orientation and gender identity. He opposed the repeal of “Don’t Ask, Don’t Tell,” saying doing so would be “social experimentation.” And he’s said that homosexuality would bring about “societal collapse.”

That’s why the stakes in this election are so high.

If elected, Clinton vows that she would work to pass the Equality Act, a federal bill that would prohibit discrimination on the basis of sexuality and gender identity in the areas of employment, housing, public accommodations, public education, federal funding, credit and the jury system.

Says Clinton of the bill,

It would finally provide LGBT people full federal nondiscrimination protections in housing, employment and so much more. I know that differences of opinion on LGBT equality still exist in the hearts of some Americans, but they should not exist under our laws. As president, I’ll be your partner in bringing about the vision of the inclusive nation that advocates, activists and allies have been seeking for decades.

LGBT people are now more likely than any other group to be the target of a hate crime. America saw the effects of hate in Orlando, with the attack on the Pulse nightclub — the deadliest mass shooting by a single person in our history. The danger is compounded for LGBT people of color, who face intersectional pressures and dangers, particularly transgender people of color. Last year, more than 20 transgender women were killed in America. Recently, three were murdered right here in Philadelphia.

We need to stop the violence and save LGBT lives. We need to collect more data around gender identity and sexual orientation in hate crimes, so we can stop them in a smarter, more effective way. And we need to finally pass common-sense reforms to address the gun violence epidemic.

Clinton also reiterated her commitment to fighting for an AIDS-free generation and advocated for expanding the use of preexposure prophylaxis (PrEP) to help prevent HIV transmission:

Like many, I’ve lost friends and loved ones to AIDS. We owe it to them — the people we love and miss, and the people whose names we’ll never know — to continue this fight.

Clinton concluded by saying she “won’t quit until all our laws reflect” the reality that LGBT rights are human rights—once and for all.

You can read Clinton’s full op-ed for PGN here.

Previous Post: « 30 Former GOP Congressmen Repudiate Trump in Letter, Call Him a ‘Mockery’ of Conservatism
Next Post: ‘Silver Daddy’ Mike Pence Made Randy Rainbow Do a Spit-Take During the VP Debate – WATCH  »