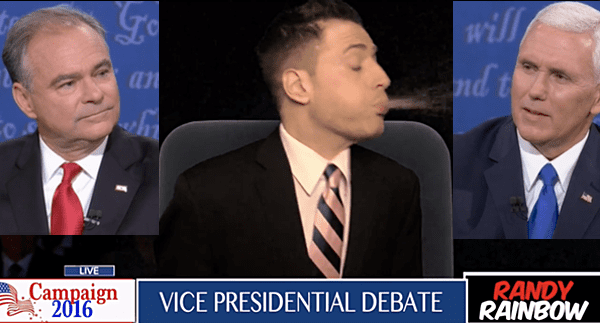 Randy Rainbow has served up his take on the first and only Vice-Presidential debate between Tim Kane and Mike Pence–or as Randy calls him, the “ultra conservative silver daddy who says he hates the gays but like most Republican politicians can’t get enough of the big D–Donald Trump.”

Though the debate only explicitly referred to LGBT issues once–when discussing Vladimir Putin–that doesn’t mean there weren’t moments that caught the attention of LGBT viewers.

"I try and spend a little time on my knees every day."

.@mike_pence to @timkaine: “You whipped out that Mexican thing again” https://t.co/x6vEzCfzh0

For the record, Randy asks that you keep that Mexican thing in your pants. And also, next time give him some warning before you talk about getting on your knees.