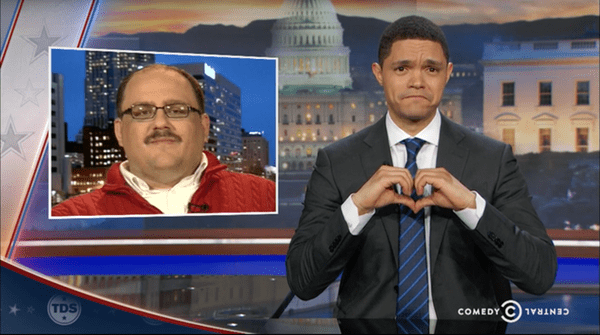 Noah, like many people, fell even harder for Bone after he told Anderson Cooper that one of the reasons he worries about voting for Trump is that he could overturn marriage equality.

“[…] If [Trump is] allowed to appoint the next Supreme Court nominee, there’s a very good chance that we could lose some of the rights that we’ve fought for for the last eight years, rights that all Americans should share, like marriage equality. And I do not want see anyone’s rights taken away.

So that’s what makes it difficult for me. It’s–we’re looking at a personal interest versus community interest election.”

Said Noah after watching that clip, “Two things I love about this guy: One, everything. Two, he’s not just thinking about his own interests in this election.”

After a few more Ken Bone clips Noah was overwhelmed by Bone’s adorableness. “He’s so fluffy!” he screamed.