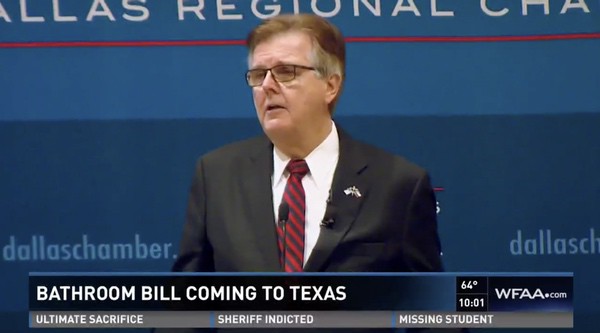 Texas Lt. Governor Dan Patrick says his anti-LGBT “bathroom bill” will be a priority in 2017 and he has rebranded it the “Women’s Privacy Act”.

Patrick made the announcement yesterday in a speech to the Dallas Regional Chamber, KHOU reports:

He went on to lay out his argument for it: “Transgender people have obviously been going into the ladies’ room for a long time, and there hasn’t been an issue that I know of,” he said. “But, if laws are passed by cities and counties and school districts allow men to go into a bathroom because of the way they feel, we will not be able to stop sexual predators from taking advantage of that law, like sexual predators take advantage of the internet.”

Nineteen states have considered legislation like this in 2016, according to the National Conference of State Legislatures. North Carolina enacted it and ended up losing several big events as a result.

Patrick doesn’t seem to care that business groups think it will hurt the economy. His hate for LGBT people is stronger than that.

Previous Post: « City Gym Boys Flex Their Dance Muscles for ‘The View’ – WATCH
Next Post: Bad Hombre Cologne: For Those Times When Just Acting Like a Dick Isn’t Enough »