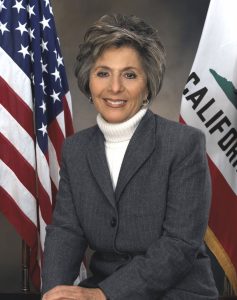 Outgoing California Senator Barbara Boxer has introduced a bill into congress that would abolish the electoral college.

Many Democrats have urged that the Electoral College be abandoned following Hillary Clinton’s general election loss to Donald Trump.

Former Democratic nominee Michael Dukakis is among those who have voiced support for ending what has been termed by some as an arcane election system.

Such legislation makes a statement after an election that shocked Democrats, but is unlikely to gain traction with Republicans holding control of both chambers of Congress in a lame duck session.

Her bill calls for an amendment to the Constitution that would end the Electoral College system. Should such a thing pass, the amendment would only take effect if ratified by three-fourths of the states within seven years after its passage in the U.S. Congress.

Clinton leads President-elect Donald Trump by nearly 800,000 votes nationally with a final count still pending, but Trump won the most electors in the electoral college system that is how the country actually picks it’s president.

Said Boxer in a statement,

“In my lifetime, I have seen two elections where the winner of the general election did not win the popular vote. The Electoral College is an outdated, undemocratic system that does not reflect our modern society, and it needs to change immediately. Every American should be guaranteed that their vote counts.”

Previous Post: « Andy Cohen Opens Up About Loneliness, Love and Being Ready for Fatherhood – WATCH
Next Post: WTF: Steve Schmidt Thinks Mike Pence and the Rest of Trump’s Anti-Gay Cabal Have Conceded on Marriage Equality – WATCH »