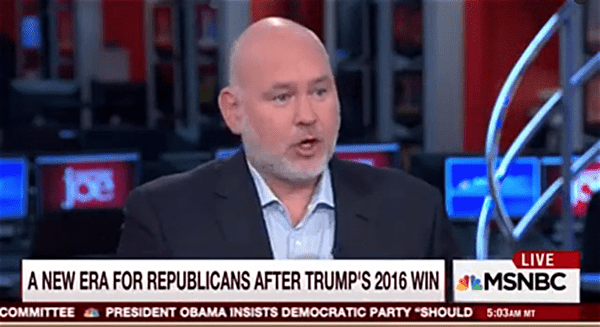 Former John McCain campaign manager and MSNBC political analyst Steve Schmidt says that the whole of the GOP has given up its anti-gay culture wars because of Trump’s recent statements on gay marriage.

“So you see all these Republican politicians asked awkwardly yesterday about Donald Trump saying on 60 Minutes, the gay marriage fight is over. Donald Trump blew the whistle on Sunday night on the culture wars. Basically said it’s over. It’s done. So if you’re a gay American this morning, it’s over. You won. You have a Republican in the White House, and there’s no more fighting about this issue.”

But what about vociferously anti-LGBT VP-elect Mike Pence, and the slew of other bigots who are likely to populate Trump’s cabinet. Well, Schmidt has an answer for that too: “Every one of those people from Mike Pence on down, their silence was acquiescence to that position. It’s over.”

However, neither Pence nor any other anti-LGBT leaders who backed Trump have yet to release statements as to whether they have in fact ‘acquiesced’ to Trump’s position on marriage equality.

Furthermore, Trump’s stance on marriage equality is murky at best. While he has said it is ‘settled law’, he has also said he would likely appoint Supreme Court justices that would overturn same-sex marriage.

And as for Schmidt’s comment that “gay Americans have won,” that hardly seems to be the case given that gay Americans can also be black, hispanic, female, disabled, veterans, and/or immigrants. To say nothing of the fact that gay and LGBT equality extend far beyond the freedom to marry.

Schmidt’s remarks about the Culture Wars also seem to completely ignore the GOP’s 2016 party platform, which is the most anti-LGBT party platform in American history.