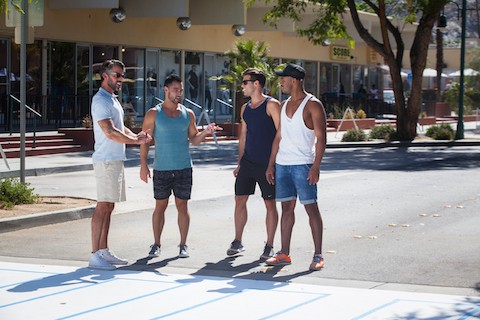 We did it, guys! We made it to the end of Robert Sepúlveda Jr.’s search for love among rejected SoulCycle trainers. Well, I did at least. Based on your comments and tweets, none of you guys are still watching this show.

I do hope you tuned in to last night though, because that was one truly bizarre finale. We had “shocking” revelations, traumatic injuries and not only the most awkward date, I’ve ever seen, but probably the most awkward “human” “interaction” committed to film.

Let’s dish about all the twists, turns and Little Toots that went down in Palm Springs in our recap, below! 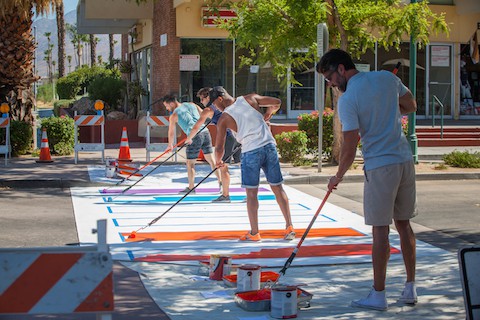 We start with the usual clichéd nonsense every reality competition finale starts with: Let’s pretend somehow, despite of weeks of evidence to the contrary, all the finalists are neck-and-neck. Robert has feelings for all the guys. The guys all have feelings for Robert. Robert has a small doubt about each guy. Each guy questions if their connection is strongest. The drama! The intrigue! It’s anybody’s game! Don’t touch that dial!

Only problem is there are zero stakes here. At the end of The Bachelor, he proposes. At the end of Finding Prince Charming they … I don’t know, share a MEN.com account? Sign up for a family plan at Crossfit? Combine Boy Butter supplies?

Have we really just been watching a bunch of dudes fight over the chance to sleep with the hottest guy in their immediate vicinity? Because that’s like the whole entire concept behind Grindr, and I can watch that all the time already with significantly less circuit workouts.

There’s not a ton of time to really overthink it, because the guys are busy packing for what might as well be a staycation in Palm Springs. Seriously. They couldn’t even get these guys a LIMO. Their Uber XL (who knows, it may have even been a Uber POOL and they picked up some Brodney or Rik to ride shotgun along the way) shows up, and they pile in.

They arrive at the Hacienda at Warm Sands, and it’s immediately insufferable. Robert has left them all a handwritten note and a tiny sign on which he wrote their completely nonsensical hashtags from the first episode (Eric = #bemyself, Brandon = #happiness, Dillon = #spontaneity, I = #gladthisisalmostover). The guys read the notes aloud, which all include Robert’s usual word salad of empty platitudes about following his heart and the essence of happiness and junk like that.

Of course, it’s only a matter of time before the guys hop in the pool. And that’s when it happens. Gird your loins, ladies, because it’s about to get real.

The guys are just sort of bobbing around in the water like big, gay rubber duckies when Robert drops the bombshell. He tells them they’ve all been honest with him, so now it’s his turn to be honest with them. IS THIS HAPPENING? IS HE REALLY ABOUT TO SPILL IT?

He is! He tells them he was an escort. After weeks of him talking about his traditional values and acting like the least interesting man on Earth (and after the rest of the world already heard about Robert’s past and watched every available nasty video), he comes clean with the guys. Basically. I mean, he doesn’t go into all the gory details (and, gurl, they are GORY), but do you blame him?

I do blame all the other guys, however, for not pushing this further. They hear this news and embrace Robert. They tell him the past is the past. They move on, AND THEY DON’T TALK ABOUT IT AGAIN. That’s insane. If that was me, I would have at least a couple of follow-up questions. But nope! This is one incurious group. I am not saying I judge Robert for what he did in the past, but I am saying that I once dated a guy whose ex did porn, and, once I found out, I didn’t sleep for two days until I saw every single video. That’s just me.

Eventually Lance Bass jumps out of the bushes, and all the guys are like “HE FOUND US!”  (Just kidding.) The fourth most talented member of ‘N SYNC (sorry, Joey) explains they’ll be going out this week painting a rainbow sidewalk in Palm Springs. The guys are like “Sounds fun!”

They paint the sidewalk rainbow, and then they spend some time being super proud of themselves for reasons that aren’t entirely clear. Did this sidewalk raise money for something? Did it tell kids it gets better? I’m not exactly sure how the sidewalk contributes to the LGBT community, but I guess we can just chalk it up to “awareness.” Hooray?

While celebrating their good deed, Brandon snaps his Achilles tendon. No, seriously. He holds it together, but it looks bad, y’all. Medical professionals would later tell him it might be a year of recovery.  If that was me, I’d be in full Nancy Kerrigan wailing agony. (Also, it’s a good thing Westboro Baptist Church doesn’t subscribe to Logo, because footage of a gay guy snapping his Achilles tendon while skipping down a rainbow sidewalk alongside the three other guys he’s kind of dating could be pretty compelling video evidence that maybe God does hate gays.)

With Brandon out of commission, Robert asks Eric out on a date. Then he heads to Dillon’s room, where Dillon decides he wants to be the one to be pursued for a change. It’s kind of a weird realization/demand to make when you’re one of several suitors in a competition for one guy’s affection. But, ok, Dillon! Go for it! Robert is honest with him about how their relationship is not as strong as the others, prompting Dillon to pack up his hideous light denim jacket and make his exit on his own terms. If they decide to pick one of these guys to come back as the Prince next year, I would put my money on Dillon to be the guy. (Sorry, Robby fans. He’s great, but he’s also taken. Let it go.)

Eric: “It was an interesting day.”

Robert: “Let’s enjoy a nice dinner together in Palm Springs.”

OK, guys, great agreement, but I think you need to heighten the scene a bit. It’s “yes, and” not just “yes.”

Even Robert, certainly no paragon of personality himself, is like Eric, dude, are you OK? After some prodding, this leads to one of those faux deep convos about how Eric is afraid of being hurt, or whatever. They do a little night swimming/making out when they get back, and I guess it’s fine. They’re obviously attracted to one another, but whether there’s a deeper connection is hard to say considering how shallow they both seem.

Due to Brandon’s injury, his date with Robert is basically just lying in bed together?  It’s like watching that video about the professional cuddler. They’re just lying there, stroking each other’s arms and maintaining direct eye contact like a couple of creeps. Without all the unnecessarily complex gym workout routines, this kind of date at least allows the guys to talk (and do more making out). I think Robert’s kissing with Brandon is slightly less gross than when he kisses Eric, so I’m pulling for him.

Robert eventually takes Brandon out to dinner. Brandon then gives a very, very articulate, passionate, rom-com climax-worthy speech about loving each other in the everyday moments. It’s the kind of powerful thing you know Robert is always desperately trying to communicate, but he fails to ever come off as authentic or thoughtful as Brandon does here. That is why I don’t think Robert will pick him. Robert wants to be the wise, sensitive one in the relationship.

Cut to preparing for the final Black Tie Affair (and cue the weekly shot of Eric putting a shirt on).  Lance and Robert do their usual chat about the remaining guys, and if there is a sadder sight than Robert weeping on a hideous sofa in the Hacienda at Warm Sands while wearing a tuxedo, I’m not sure I want to see it.

The time comes for them to stand out in this big, tacky grotto for the final Black Tie Affair. After much hemming and hawing and sobbing, Robert decides to send Brandon home. It’s a shame. Brandon is a great guy. Probably the best of the bunch, honestly. He’s adorable, he’s sensitive, he doesn’t take himself too seriously. He’s a little too into “energy” and all that, but it’s kind of charming and overall harmless. He’s a hideous dancer, I couldn’t take him anywhere. Wait a second, what am I stressing about?

The worst part about his elimination is that he has to hobble over on his crutches to give Robert his tie back. The tie gimmick is sincerely the best/worst part of this show, and I will be devastated if they don’t bring it back next season.

That leaves Robert and Eric to prance merrily off to their destiny. I think Finding Prince Charming handled Eric’s story with exceptional grace and dignity. It sends a powerful message against HIV stigma with him winning the whole shebang.

That doesn’t mean I think he’s got a great (or any!) personality. At the end of the day, I think that’s exactly the kind of guy Robert was after all along. You two dummies deserve each other.

What did you think of the finale? Did Robert pick the right guy?

I’ll be back next week with highlights from the reunion and some final thoughts on Finding Prince Charming’s first season.

Previous Post: « ‘Notes From the Field’ Should Be Required Viewing for All Americans: REVIEW
Next Post: Playwright Del Shores Rips ‘LGBT for Trump’ in Truth-Telling Tirade: WATCH »