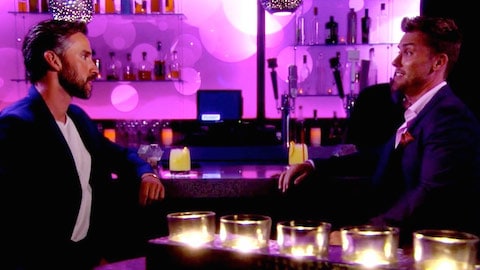 For all the drama preceding the premiere of Logo’s new reality dating competition Finding Prince Charming, last night’s 90-minute introduction seemed to go out of its way not to ruffle any feathers.

Perhaps a better title would have been The Bland and the Beautiful.

He’s a successful business owner, he has a supportive family, he paints crosswalk rainbows for charity, he travels the world, and yet, he’s still painfully uninteresting. He’s the kind of guy who takes a picture in front of the Leaning Tower of Pisa to make it look like he’s holding it up. I think that says it all.

The men vying for his attention are essentially more of the same. In an attempt to “defy stereotypes” the suitors talk about really wanting monogamy, fairy tale love and how being gay is “not all pride and pageantry.” It’s as if they were all pulled from early-aughts “post-gay” purgatory and given 2016 tasteful facial hair.

I mean, just statistically speaking, you’re telling me none of these guys are showing up hoping to find a satisfying member of their polyamorous triad? No one wants to be monogamish? No one wants to just meet a guy to flip houses and share a Grindr account with? I’m all for debunking the belief that every gay man is sex-crazed and incapable of monogamy, but, like, some of us are? It all comes off not only as overly quaint, but actually disingenuous.

It’s not only lust that’s been removed for the sake of #samelove, but these guys’ personalities seemed to have been removed with it. What a joyless, humorless collection of gay men. Are we so afraid of stereotypes that they aren’t even allowed to quip?! 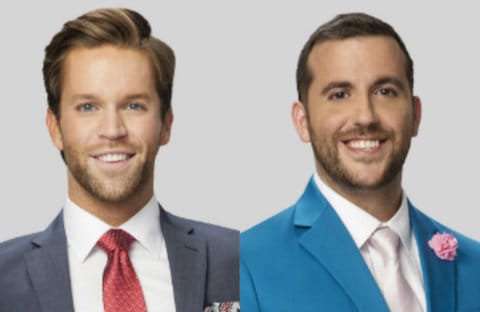 The exception being Robby (above left), the house’s token queen. One of the only moments of actual drama comes in a lightning fast scene where one of the other guys, Sam (above right), calls out Robby for being so flamboyant, admonishing him to “fix his dress.” Robby, bless him, takes it well. The next day, he’s using his spray tanner and putting on his tiny pink trunks, and, honestly, he adds a desperately needed splash of color in every way. Here’s hoping he sticks around, if only to challenge the overwhelming masc4masc mentality.

Sam’s single (weak) read was the only flash of drama to wring from the 90-minute premiere. They tried to stir up a little interest when the guys first arrived by having Prince Charming mingle among the suitors as if he was one of them. It provided all the tension of an episode of Blue’s Clues. Some of the guys had already guessed the twist within the first few moments of meeting him. One of the guys, Paul, mistakenly revealed to Robert that he only dated short guys before realizing he was talking to our tall drink of Prince Charming. That’s as scandalous as it got.

RELATED: Logo Had No Idea Their ‘Gay Bachelor’ Robert Sepulveda Jr. Once Worked as an Escort

Robert revealed himself during a painful opening “game” where the guys introduced themselves with a hashtag. And how did the boys brand themselves? #chemistry. #spontaneity. #perfectionist. #bemyself. I’m telling you, not an Oscar Wilde in the bunch.

On day two, the guys all mingled at a pool party where not a single one of them was wearing a bulging bikini from Andrew Christian. (Even their swimwear was straight-washed!) The guys were all jockeying for one-on-one convos with Robert, and, as a viewer listening in on these dreadfully boring convos, I would have rather drowned.

Paul (would we call him the “heightist?”) doesn’t go out of his way to get his time with Robert before the party is over, so he races after Prince Charming as he exits. He blurts out that he’s been shy because his ex died last Thanksgiving. Maybe the editing was unkind, but it felt a bit like a desperate non-sequitur. 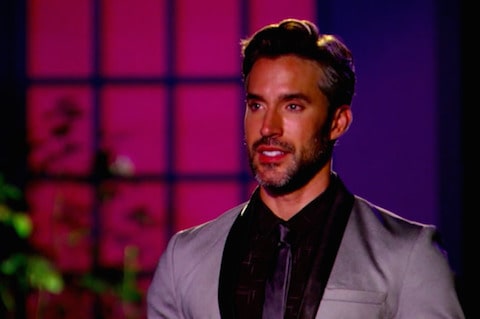 Whatever, it works. During the elimination ceremony, where Robert bestows black ties on the boys he wants to keep, Paul manages to stay and join the other guys who have to stand there with their collars all messed up wearing ties that clash with their blazers.

Instead, Robert sends home Charlie — a slightly bearier dude who talked smack about the other guys during his chat with Robert in the pool — and Nick, who was actually sort of awkward and probably the most “average” looking of any of these guys. Neither of those men were remotely “fat,” but with them gone, the average body fat percentage in the house now hovers at about .03. And that’s even if you take into account losing personal trainer Brodney.

ALSO: ‘Gay Bachelor’ Robert Sepulveda Jr.: My Past as an Escort ‘is the Past’ – WATCH

A preview for the remainder of the season appears to be mostly just as banal. It seems in slavishly emulating The Bachelor formula Finding Prince Charming forgot some of the most important elements: villains, crazies, trash. Maybe the claws will come out, but even on The Bachelor these dummies come out of the limo swinging, full-tilt crazy. The overly earnest edit seems to be so afraid of its responsibility to portray same-sex love with respect it’s forgotten this is supposed to be reality TV. Even if the show declines to explore the uniqueness and intricacies of queer relationships, that doesn’t mean it has to be so soulless and sanitized.

The real irony is until we have a reality dating competition as messy and embarrassing as straight people it won’t actually be equal.

What did you think of the premiere of Finding Prince Charming?