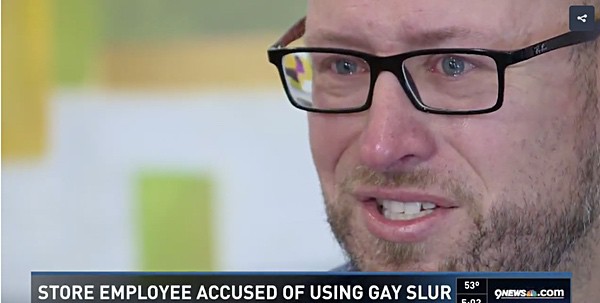 A Highlands Ranch, Colorado manager at Floor & Decor has been fired after verbally assaulting a gay customer in front of his 4-year-old son.

“The individual at issue is no longer employed by F&D,” writes Floor & Decor in a Facebook comment. “We are an inclusive and diverse company and are committed to treating all customers with courtesy and respect at all times.”

James Shawlin and his 4-year-old son were shopping at the Highlands Ranch Floor and Decor on Friday when Shawlin said they were verbally assaulted by a store manager who called him “the faggot that voted for Hillary,” and by another customer who overheard the manager and interjected, “what are these faggots going to do to this child?”

Shawlin said he had returned to the store complaining about some damaged stone slabs he had bought for an interior renovation when the alleged assault happened, 9 News reports:

“I was a little firm with him, and I just told him, ‘hey, you know, my husband and I spend a lot of money here. We’ve been using you guys for ten years. We have $3,000 worth of stone.’” Shawlin said. “And [the manager] goes, ‘oh, that explains it now. The faggot that voted for Hillary.’”

Shawlin said another customer in the aisle who’d overheard the exchange expressed his support for Donald Trump. Shawlin said the same customer followed him outside and used a derogatory term.

“He basically said, ‘what are these faggots going to do to this child?’” Shawlin said.

Watch the report and interview with Shawlin here.