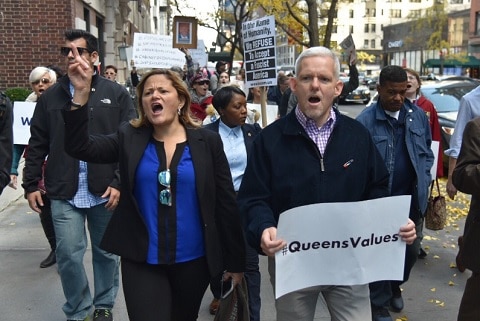 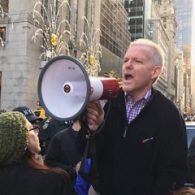 “Rest of the people from Queens do not agree with your homosexual lifestyle, so get the [expletive] out of this country, you [expletive] traitor! I will keep a close eye on your every moves so that when it’s time to execute traitors I will try my best so that your name is included in that list of traitors. Execution is the penalty for a traitor, that is the Law of This Land!”

According to the NY Daily News, another email sent last Tuesday from the same Gmail account read:

“I know that you are a gay man and you can do whatever you want at your own privacy. But don’t push your agenda to other normal males and normal kids as we find that pretty disgusting.”

Accompanied by around 500 Queens residents, Van Bramer went ahead with the protest march on Saturday to let Trump know his rhetoric is not indicative of his native borough’s values.

Prior to the march, Van Bramer said:

“That’s unfortunately the times we live in. I’m not scared and we’re not stopping our peaceful and patriotic opposition to some of the really horrible things that this administration has promised to do. We’re not backing down.”

He also said Mayor de Blasio called to say that “all of New York is standing with me.”

NYPD Commissioner James O’Neill has said police are zeroing in on a suspect.

Watch Van Bramer speak at the protest below.

Previous Post: « Alec Baldwin Fires Back at Donald Trump on Twitter: Stop Generating Fear and Doubt
Next Post: Cristiano Ronaldo Responds to Anti-Gay Slur on Field: ‘A Faggot, Yes, but a Rich One’ »