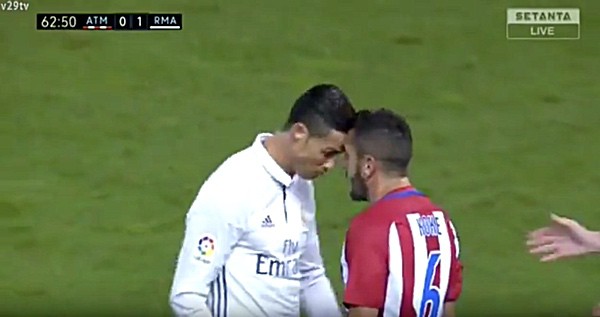 Television viewers even claimed that the Bernabeu icon threw a punch at the Atleti acein the incident.

And, according to Cadena Cope, the fuse was lit when Koke called Ronaldo a ‘faggot’.

To which the three-time Ballon d’Or winner allegedly replied: “A faggot, yes. But a rich one, bastard.”

The Spanish radio station claims to have heard the conversation Ronaldo, 31, had with team-mates in the visitor’s changing room after the game.

Other outlets translated the response as ‘A faggot with a lot of money, you bastard’.’

Ronaldo was taunted by fans last April after rumors about an alleged relationship with Moroccan kickboxer Badr Hadri.

Morocco World News reported, “the crowd were heard chanting ‘Vete a Marruecos,’ or ‘Go to Morocco,’ in reference to the player’s regular visits to Morocco.”

Ronaldo was also targeted with chants of “maricon”, a Spanish anti-gay slur comparable to “faggot.”