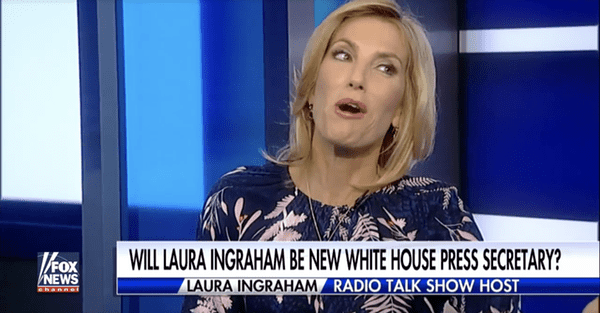 Laura Ingraham, conservative radio host and hater of the phrase ‘bible thumper’, says she would be “honored” to serve as Donald Trump’s Press Secretary–but won’t say whether he has tapped her to fill that post.

“We’ll see what happens,” she said, adding that “I think people are getting a little far ahead of the narrative.”

Ingraham has been a longtime supporter of Trump’s, boosting his candidacy on her radio show and during TV appearances. She also helped Trump prepare for the presidential debates against Hillary Clinton.

“It’s a big decision, but I’m at the point where, if my country needs me, and if I can do something to actually, you know, advance the Trump agenda, which is stuff I have written about now for 15 years, with trade, immigration and just renewing America, then I obviously have to seriously consider that,” she said on Fox News.