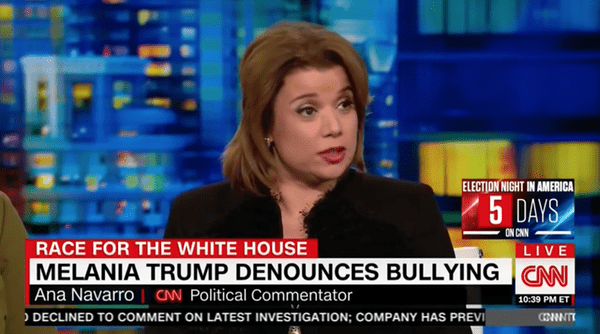 Navarro, a Floridian #NeverTrump-er and former proponent of Jeb Bush, had long said she would be writing in her mother for president this election. However, poll tightening in swing states (including Florida) and the threat of a Trump presidency swayed Navarro to ultimately cast her ballot for Clinton.

Navarro said she was also heavily influenced by the specter of the 2000 election in which a mere 537 votes in Florida ended up determining the outcome of the presidential race between George W. Bush and Al Gore.

In an op-ed for CNN, Navarro wrote,

Of voting for the Democratic nominee, Navarro said, “I did not want to vote for Hillary Clinton.” She expressed concern of Clinton’s emails and her judgment, but said those concerns were outweighed by what she perceives as Trump’s deeply flawed character.

Navarro went on explain how she was able to vote against the nominee of her party:

I voted against Donald Trump because I am a Republican. I accept that Trump duly won the Republican nomination. But I do not accept that he represents Republican values — not the ones I grew-up respecting.

I have been a Republican since before I could vote. My family fled communism. Ronald Reagan fought communism. That sealed the deal for me. I have been an active partisan my entire adult life. This is the first time I vote against the Republican nominee for President.

Navarro also added that, in her view, “Trump brings out the worst in America”:

Division. Hostility. Racism. Bigotry. Misogyny. Things we used to hide. Feelings we used to try to overcome. Under the guise of not cowing to political correctness, some people are no longer embarrassed or ashamed to show the warts on their souls.

We each have a right and a duty to make a personal choice based on those things that are most important to us, that we value most. My conscience compels me to do every little thing I can to make sure a bad person is not our next president. In America, we don’t choose our leaders through violence or armed insurrections.

Watch a supercut of some of Navarro’s most memorable moments commenting on this election, below.