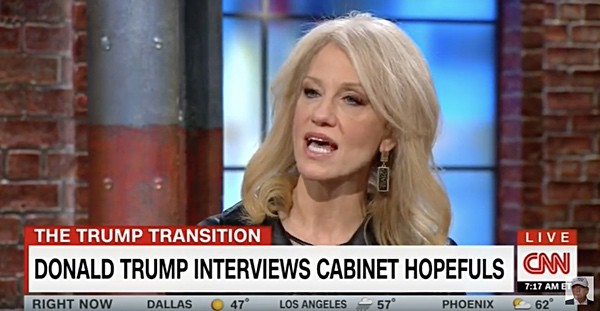 Kellyanne Conway defended Donald Trump’s undignified use of Twitter after a weekend in which the President-elect lashed out at an SNL sketch and Mike Pence’s treatment at Hamilton, continuing to reveal the thin-skinned ego that characterized much of his eruptions during the campaign.

Asked Cuomo: “Why take it up? Why take up SNL? No president does that. Why waste the time? Why distract?”

“Why do you care? Who’s to say that he can’t make a comment and still be the President-Elect?…You’re assigning malice – you’re assigning wrongdoing to him when it doesn’t exist.”

Conway also defended Trump’s pick of racist, homophobic Senator Jeff Sessions (R-AL) as Attorney General, ignoring the fact that he was turned down for a judicial appointment because of racially charged comments declaring the NAACP as Communist-inspired and joking about the KKK.

Cuomo guffawed after asking about Rudy Giuliani and Mitt Romney’s consideration for Secretary of State, when Conway replied, “They both had very different roles in Mr. Trump’s campaign.”

Cuomo laughs, “Boy you are good, Kellyanne, I gotta tell you.”

Romney’s sole involvement in Trump’s campaign, of course, was, calling Donald Trump a “phony”, “a con man”, a “fake”, and a “fraud” in a speech denouncing him in March.