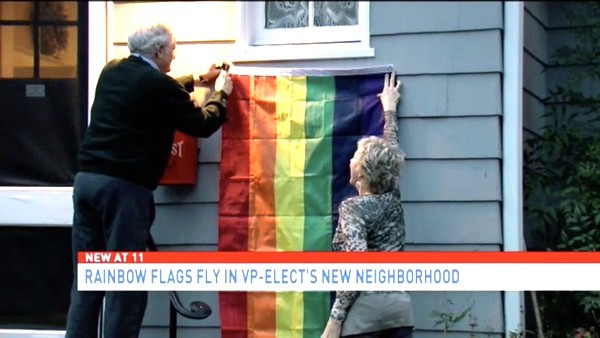 Neighbors of Vice President-Elect Mike Pence are coming out in solidarity against his anti-gay views and hanging rainbow flags on the fronts of their houses, WJLA reports:

“A respectful message showing, in my case, my disagreement with some of his thinking,” said Ilse Heintzen.

The ‘he’ Heintzen is referring to is Vice-President Elect Mike Pence. Pence moved into a house on Heintzen’s block where he will stay on-and-off until he moves into the Vice-President’s mansion on the grounds of the Naval Observatory next year.

Neighbors started hanging the pride flags after the VP-Elect moved in because the LGBTQ community has criticized Pence’s policies regarding LGBTQ rights.

Pence’s block now features at least six Pride flags with “more on the way” according to WJLA.

Residents on NW Washington Street where VP Elect Pence is renting a house are sending him a symbolic message. More residents may hang flags pic.twitter.com/fldYsMoP6i

So far the video embed below isn’t working, so if you can’t watch it head over HERE:

Previous Post: « ‘Ribbons’ is a Poignant Elegy for Those Lost to AIDS, and a Pact Between Generations: WATCH
Next Post: Todrick Hall Opens Up About Starring in ‘Kinky Boots’: ‘I’m Having the Time of My Life’ – INTERVIEW »