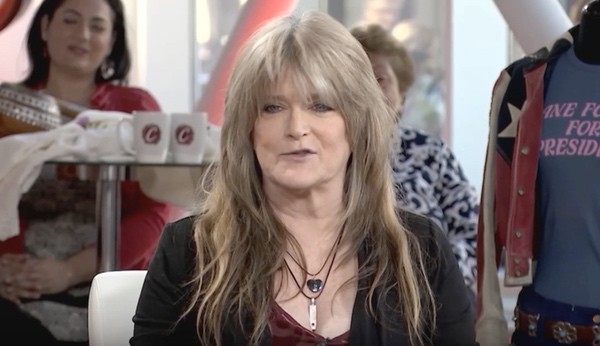 Leon Acord-Whiting, the actor/writer/producer and activist behind the web series Old Dogs & New Tricks, was not happy when he heard L.A. talk radio host Susan Olsen (formerly Cindy Brady of The Brady Bunch), “spewing” misinformation and decided to call her out on it. Sheena Metal and Olsen host the show ‘Two Chicks Talkin’ Politics’.

“It is wildly irresponsible for LA Talk Radio to allow a Trump fanatic to co-host one of their programs, where she can spew her idiotic lies unchecked. (Being a liberal and a patriot are mutually exclusive? Hillary is causing the protests & hate crimes? The Koran is a political tract?) As much as I love Sheena Metal, I think LA Talk Radio needs to give “Cindy Brady” her walking papers. I will not listen to or appear on any shows there from this point forward until she’s gone. This isn’t just disagreeing on, say, tax plans or foreign policy. Susan Olsen spreads outrageous misinformation & it is dangerous and unprofessional.”

Olsen responded by reposting his comment and sending her followers to get him. Said Olsen: “This is the little piece of human waste. He blocked himself from me before I could even get one hit in. If you can find him, please send him my love.”

She also sent Acord-Whiting a private message, which he posted:

“Hey there little pussy, let me get my big boy pants on and Reallly take you on!!! What a snake in the grass you are you lying piece of sh*t too cowardly to confront me in real life so you do it on Facebook. You are the biggest faggot ass in the world the biggest pussy! My Dick is bigger than yours Which ain’t sayin much! What a true piece of sh*t you are! Lying faggot! I hope you meet your karma SLOWLY AND PAINFULLY” 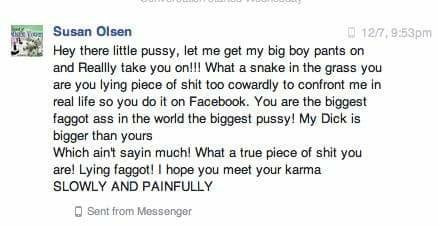 And another, calling him a “pathetic little c*nt:” 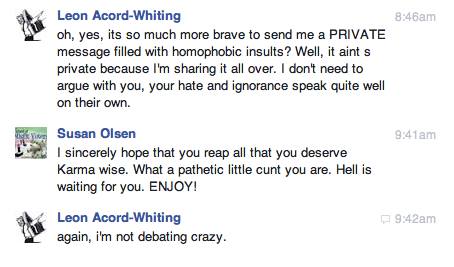