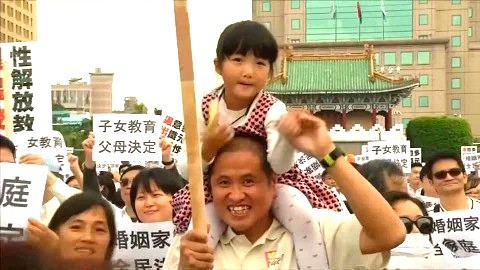 Over 100,000 people took part in a protest against same-sex marriage in Taiwan on Sunday.

The protest’s organizer the Coalition for the Happiness of Our Next Generation said 80,000 people attended the demonstration in Taipei while companion rallies in other cities attracted around 90,000 participants. Protesters also railed against what they called a pro-homosexual curriculum to be driven out of schools. A landmark 2004 education act opened the way for tolerance to be taught in schools.

According to the Economist, lawmakers from both the ruling Democratic Progressive Party and the more conservative opposition KMT have very similar bills before the national legislature that would give same-sex couples the same rights as any others, including to adopt. That would make Taiwan the only country in Asia to permit gay marriage.

The Taipei Times reports that at the Taipei rally Chu Wu-hsien, spokesman for the National Religious Alliance, said:

“We oppose homosexual marriage being amended into the Civil Code because the family system comprised of marriage between one man and one woman is the foundation of society, and if you damage it, that will lead to marriage, family and the structure of society being completely wiped out.”

“Every person has a right to love, but there is also a proper order to love: We do not use the same manner to love animals as people, and love for a husband and wife is different from how you love friends.”

Several counter protests took place during the Taipei demonstration. Referring to numerous front-page newspaper advertisements and prime-time TV slots by same-sex marriage opponents in recent weeks, activist Liu Yu said “Everyone has to do their part on this issue, and we hope people will recognize our efforts even though we do not have nearly as much money as the opposition.”

NOM’s Brian Brown was also on board with the protest.

Way to go, Taiwan! We're with you in spirit. https://t.co/AvXh4KSNpU

A rival protest in favor of gay marriage is scheduled for Saturday.

Watch a video of the protest and a report on same-sex marriage in Taiwan below.