Matthew Paish and Sarbjit Gill, Vancouver entrepreneurs who enjoy inappropriate humor and dislike injustice, were two years into researching and developing an underwear business when the shocking news came that Donald Trump was elected president.

The election left us stunned, like most Americans, and the horror of reality set in shortly thereafter. We are still in shock. Presumably, so are many others who care about equal rights and justice for all, whether they are Black, White, Asian, Muslim, Mexican, part of the LGBTQ+ community or other. With our moods mired knowing the positive progress has been halted, we wanted to create a pair…

So, they’ve developed a pair of “undies for humanity” called The Protest Pair that they’re funding through Kickstarter.

As they describe the boxer briefs:

The underwear features a buffoon yelling into the abyss, holding a megaphone in his teeny-tiny hands. “Blah blah blah blah blah” is written all over to represent his tweets. There’s also a horizontal fly thoughtfully placed over Mr. Trump’s mouth for easy access when nature calls. 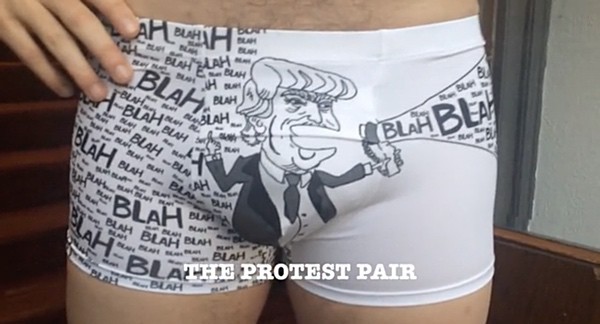 Throughout the campaign, the founders will make personal donations to the causes listed below — the causes that the incoming administration should be for, but is against. You are welcome to let us know which projects you care about the most. Please note that no funds raised on Kickstarter will go towards charitable organizations as per Kickstarter policy (disclaimer). The founders however will make personal donations to these causes on behalf of Mr. Donald Trump, Mike Pence and Paul Ryan, and send donation certificates to their respective offices. Plus, we’ll tweet @realDonaldTrump with each $5 and above pledge.