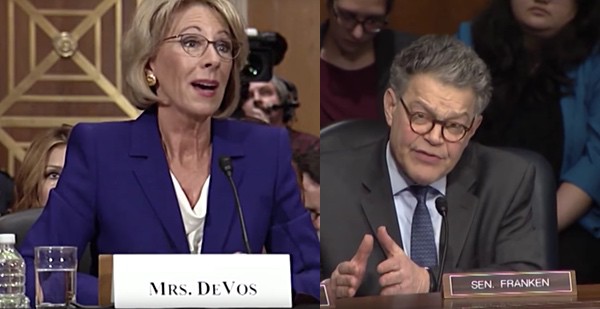 Trump’s Secretary of Education pick Betsy DeVos, a Michigan billionaire with a staunchly anti-LGBT record, sat before a Senate panel last night for her confirmation hearing.

Senator Al Franken (D-MN) aired DeVos’s support for organizations that support gay “conversion therapy”, a practice that she then denied she supports.

Franken then demonstrated her willingness to throw false numbers around.

“Mrs. DeVos, your family has a long history of supporting anti-LGBT causes including donating millions of dollars to groups that push conversion therapy, the practice of trying to change someone’s sexual orientation or gender identity. For example, you and your family have given over $10 million to Focus On the Family, an organization that currently states on its website that, ‘homosexual strugglers can and do change their sexual behavior and identity.’

“Mrs. DeVos, conversion therapy has been widely discredited and rejected for decades by every mainstream medical and mental health organization as neither medically nor ethically appropriate. It has been shown to lead to depression, anxiety, drug use, homelessness, and suicide, particularly in LGBT youth. In fact, many of the leaders and founders of conversion therapy, including both religious ministries and mental health professionals, have not only publicly renounced it but have issued formal apologies for their work and how harmful it has been to the individuals involved. Mr. Chairman, I would ask that this be included in the record.

“Mrs. DeVos, do you still believe in conversion therapy?”

“First of all, let me say I fully embrace equality and I believe in the innate value of every single human being and that all students, no matter their age, should be able to attend a school and feel safe and be free of discrimination. So let’s start there and let me just say that your characterization of our contributions I don’t think accurately reflects those of my family. I would hope that you wouldn’t include other family members beyond my core family.”

Franken then proved her willingness to lie:

“Well, in terms of throwing numbers around, you said that student debt has increased by 1,000 percent.”

“That’s just not so. It’s increased 118 percent in the past eight years. So, I’m just asking if you’re challenging my figures, I would ask that you get your figures straight about education policy and that’s why we want more questions. Because we want to know if this person that we are entrusting to be the secretary of education, if she has the breadth and depth of knowledge that we would expect from someone who has that important job.”

Lesbian, gay, bisexual, and transgender students contact Lambda Legal every day to seek help being safe at school.  We need a Secretary of Education who will make schools safe for all students, and who won’t tolerate bullying – by peers, parents, or school administrators. What we know so far about Betsy DeVos’s record concerns us. She has supported Focus on the Family, which opposes marriage equality, and her family foundation has funded a group that advances the dangerous practice of so-called ‘conversion therapy.’ Her advocacy for privatizing public education could eject students – LGBT or not – from the protection of federal laws.  A complete confirmation process for Betsy DeVos is necessary in order to fully investigate whether she supports equal rights for LGBT students.

Under the Obama administration, the Education Department’s Office for Civil Rights has aggressively policed civil rights issues — such as cracking down on colleges that mishandle sexual assault cases, and urging schools to extend anti-bullying policies to cover LGBT students. During the election, the Trump campaign was critical of the civil rights office, with some Trump surrogates questioning its very existence. DeVos has said little about such issues, but civil rights advocates have said they’re “deeply concerned” that she might seek to rein in the office’s enforcement efforts. They note the DeVos family has a long history of supporting anti-gay causes — including donating hundreds of thousands to groups that push “conversion therapy” — raising questions about how DeVos would address discrimination against gay and transgender students. Democrats and advocacy groups are also concerned about donations that DeVos’ foundation made to another group, the Foundation for Individual Rights in Education, which has pushed to raise the standard of evidence in sexual assault cases on college campuses. Ed Patru, a spokesman for a group of DeVos supporters, said she sees private school vouchers and charter schools as a civil rights issue. “In hundreds of communities of color, kids aren’t being taught the skills they need to succeed in college or find the kinds of jobs that pay enough to escape poverty, and Betsy believes that is an alarming civil rights crisis,” Patru said.

And you can read about DeVos’s further conflicts HERE.