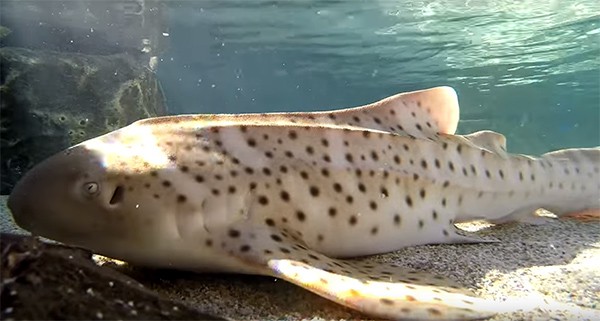 Chalk it up to 2016. For the first known time, a shark has reproduced asexually after having previously produced offspring through mating. A zebra shark in an Australian aquarium has been reported to have made the switch in April of last year.

The proud and apparently determined mother, Leonie, delivered three pups, Cleo, CC and Gemini, at the Reef HQ Aquarium in Townsville, Queensland. She had previously had a male partner from 2006 through 2012, birthing 20 pups, until aquarium staff had trouble keeping up with the number of young she was having. But she had apparently not let that separation cramp her maternal style with the arrival of new litter of pups. Christine Dudgeon, a biologist at the University of Queensland, came to investigate and published her findings this week.

“There were two possible explanations for Leonie’s eggs hatching,” said Dudgeon. “One was sperm storage, which has been documented in several occasions. Sharks have been known to store sperm from male sharks for extended periods of time. “The other was parthenogenesis [asexual reproduction]. This has been seen in a handful of sharks, but none that had mated previously.”

When analysis of the newcomers only turned up genetic material from their mother, it confirmed that Leonie had accomplished the feat on her own. While asexual reproduction in which eggs mature on their own without fertilization, known as parthenogenesis, is not an unknown phenomenon among vertebrates, including isolated instances recorded among sharks, it occurs in creatures who have been completely isolated from mating partners.

What makes Leonie distinctive is that she was equipped to opt for the alternative after previously having sexually reproduced. Researchers now plan to track the pups through maturity to observe whether they revert to more typical mating patterns. They will also see if their reduced genetic diversity exposes them to health problems, the main selling point for sexual reproduction over asexual.

In a species that is now listed as endangered, some unexpected additions might not be such a bad thing. Zebra sharks were once commonly found in tropical waters worldwide, and their new reduced status is a troubling sign:

“These sharks are an apex predator, so they are like the proverbial canary down the mineshaft — they are a poignant indicator of the quality of the environment in general,” said Tristam, who is grateful that Leonie’s case is attracting increased attention to the plight of the species. “The news that they are endangered was horrific news for biologists all over the world,” he added. “It’s a real concern.”