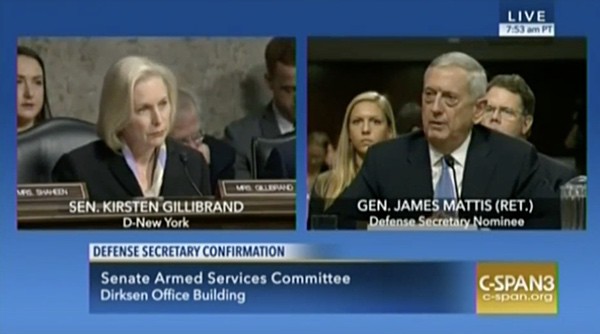 At a Senate confirmation hearing today, Senator Kirsten Gillibrand questioned Trump’s Secretary of Defense nominee General James Mattis about his past statements that women should not be in combat positions and that there should be concern about gays serving openly in the military.

MATTIS: “Senator, I was not in a position to go back into government when I made those statements (about women). There are many policies that have been enacted, over many years, including the years I’ve been on active duty. I’m coming in with the understanding that I lead the Department of Defense, and if someone brings me a problem, then I’ll look at it, but I’m not coming in looking for problems. I’m looking for ways to get the department so that it’s at its most lethal, uh, stance….I have no plan to oppose women in any aspect of our military.”

GILLIBRAND: “In your book, Warriors and Citizens and the interviews you did afterwards…you said in recent policy debates such as those about allowing homosexuals to serve openly…you believe that ‘the American public is not nearly as concerned as it should be that the changes to military policies are accruing risk to our forces. We fear that an uninformed public is permitting political leaders to impose an accretion of social conventions that are diminishing the combat power of our military disregarding our war-fighting practitioners advice.’ Do you believe that openly serving homosexuals along with women in combat units is undermining our force?”

MATTIS: “Senator, my belief is that we have to stay focused on a military that is so lethal that on the battlefield it will be the enemy’s longest day and their worst day when they run into that force. I believe that military service is a touchstone for patriots of whatever stripe. That’s simply the way they demonstrate their commitment and I believe right now the policies that are in effect unless a service chief brings something to me where there has been a problem that has been proven then I’m not going in with the idea that I’m going to review these and right away start rolling something back.”

GILLIBRAND: “Do you believe that allowing LGBT Americans to serve in the military or allowing women in combat is undermining our lethality?”

MATTIS: “Frankly, senator, I’ve never cared about two consenting adults and who they go to bed with.”

GILLIBRAND: “So the answer is no?”

MATTIS: “Senator, my concern is on the readiness of the force to fight and to make certain that it is at the top of its game so that we go up against an enemy the criteria for everything we do in the military up until that point when we put our young men and women across the line of departure is they will be at their most lethal stance. That’s my obligation as I move into this job.”