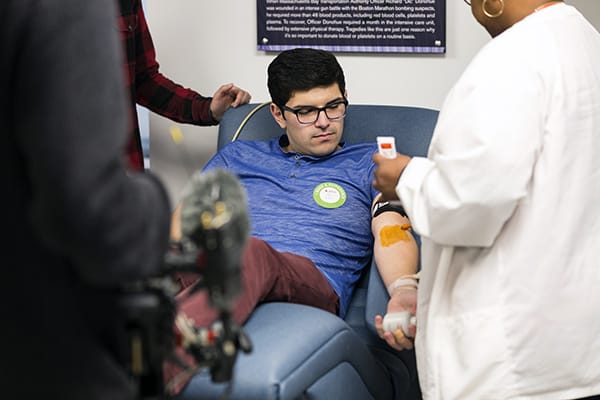 On January 10, 2017, 21-year-old Jay Franzone gave blood. What made this noteworthy is that Franzone, as a gay man, had to abstain from sex for an entire year in order to be eligible as a blood donor as per federal policy. He took the deliberate and drastic step to qualify in order to create broader awareness of the draconian requirement, itself an attempt to amend a previous lifetime ban on gay blood donors.

“It’s been an immense pleasure to take a stand against the FDA’s outdated and discriminatory federal policy by giving back to our nation’s blood supply which the lives of family and friends have relied on,” said Franzone, writing to this site to announce his move. His one-man campaign of sacrifice first drew attention last year, and at its successful conclusion earlier this week, Franzone has further engaged the media, penning an op-ed for the New York Times, as well as being accompanied by a film crew for the HBO documentary show Vice for the occasion. He also took part in a Q&A with Huffington Post’s Queer Voices to provide more background to his decision, as follows.

An activist for the National Gay Blood Drive, Franzone had already been mooting a plan to partake of a yearlong celibacy in order to highlight the new imperfect policy, but he explains that a “three-month dry spell” led organically into the full-fledged thing with the support of his then-boyfriend, Ben.

Despite admitting that the entire policy is essentially “based on the honor code,” he felt it important to his personal integrity and the activist mission that he truly abide by the celibacy vow rather than succumb to temptation. To critics who might charge that complying is, in effect, reinforcing the notion that gay men who engage in thoughtful, safer sex practices are still somehow tainted, Franzone that a blanket boycott is as equally short-sighted as the blanket ban, is “counterproductive, and could cost lives.”

While efforts and “work to educate and have allies give blood in our place” remain important, he feels that ultimately it is all about what is best “for the recipients of the blood” themselves and that they have this potential lifeline. Citing someone who got in touch with him after learning about his activism, who related how her young child undergoing surgery was denied immediate access to blood from close relatives due to their LGBT identity, Franzone says giving kids like him “the tools to fight” is paramount.

What Franzone and the National Gay Blood Drive advocate for is a switch to a policy based on individual risk, modeled after those in other countries such as Spain.

In a background document, they call the current policy arbitrary and ineffective: “The ban perpetuates inaccurate stereotypes and a negative stigma about the gay male population. The ban also supports the idea that straight people are incapable of contracting HIV, which is simply not true. A straight person who has unsafe sex with multiple partners can give blood [and] creates a larger risk than a gay person using protection.”

In his op-ed, Franzone notes:

This past summer, the F.D.A. began the process of reconsidering its one­-year policy. One alternative it is exploring is based on an individual risk assessment, in which potential donors would be asked a series of questions to determine whether they engaged in behaviors that put them at a high risk for contracting the virus. . . . The F.D.A. should adopt a modern blood donor deferral policy that is based on the risk of individual donors, as determined in interviews by people trained to make that determination. This approach is used successfully in Italy and Spain, among other nations. In Italy, donors are asked to refrain from giving blood if they have been involved in sexual activities that have a high risk of H.I.V. transmission. Spain asks donors if they have engaged in specific risky sexual behavior in the last six months. Merely being gay is not grounds for automatic deferral in those countries.

While the FDA’s recent change in its approach, after some thirty years of no movement on the lifetime ban, left much to be desired, it was still characteristic of other attempts by the Obama administration to update federal policies with regards to the LGBT community, Franzone remains wary of the potential drawbacks the incoming and less sympathetic Trump administration may precipitate. He insists “we remain very firm in our resolve that we’re not going to let this change” backwards due to the next presidency. But the fact remains that activism for a more enlightened FDA policy with respect to blood donations from gay men may now have to operate on two fronts to prevent a relapse to the even more restrictive ban of yesteryear.
Photo Credit: Tamzin B. Smith Portrait Photography