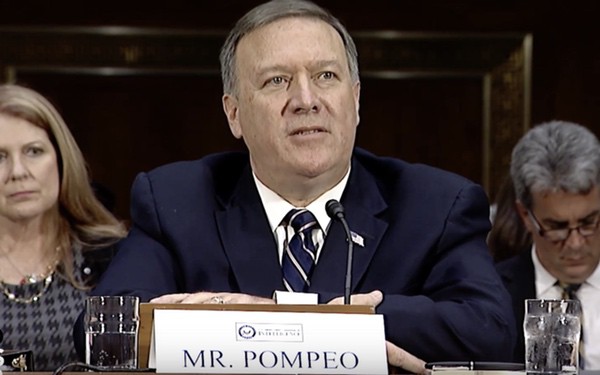 Pompeo told Harris that “every employee will be treated in a way that is appropriate and equal.”

HARRIS: Your voting record and stated position on gay marriage and the importance of having a ‘traditional family structure’ for raising children is pretty clear. I disagree with your position, but, of course, you are entitled to your opinion. I don’t want to that, however, to impact your opinion on that matter—the recruitment or retention of patriotic LGBT women and men in the CIA, some of whom, of course, have taken great risks to their lives for our country. Can you commit to me that your personal views on this issue will remain your personal views and will not impact internal policies that you put in place at the CIA?

POMPEO: Senator Harris, you have my full commitment to that. I would only add that in my life as a private businessman, this same set of issues was out there. I had my views at that time as well, and I treated each and every member of the workforce that I was responsible for at those times with the dignity and respect and demanded of them the same things I demanded of every other person that was working as part of my team.

HARRIS: And do I have your assurance that this equal treatment will include policies related to child care services, family benefits, and accompanied post for dependents?

POMPEO: Uh, without knowing the full set of policies and benefits at the Central Intelligence Agency, I haven’t had a chance to find that out just yet, you have my assurance that every employee will be treated in a way that is appropriate and equal.

HARRIS: And that you will not put in place any policies that would discriminate against any members because of their sexual orientation?

POMPEO: Ma’am, I can’t imagine putting in place any policy that was discriminatory with respect to any employee.

Pompeo is a deeply conservative evangelical Christian who says, “America had worshipped other Gods and called it multiculturalism. We’d endorsed perversion and called it an alternative lifestyle.” He believes politics is “a never-ending struggle … until the rapture.” He does not sound like the type of person one normally associates with the intelligence community. But this is the Trump administration, and Trump has promised to shake things up. An apocalyptic Islamophobic fanatic at the head of CIA will no doubt bring change to the agency.