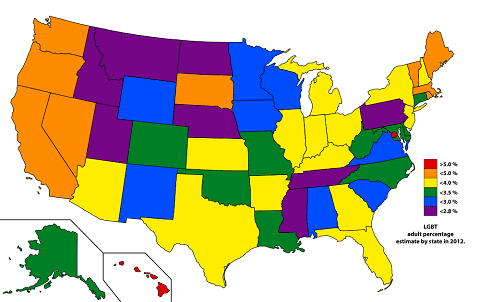 A new survey has shown that more than 10 million Americans now identify as LGBT.

The survey also found that:

Based on replies from more than 49,000 respondents, Gallup says that millennials drive virtually all of the increases observed in overall LGBT self-identification. Millennials identifying as LGBT increased from 5.8% in 2012 to 7.3% in 2016 while LGBT identification remained relatively stable over the five-year period at among Generation X and declined slightly among baby boomers and traditionalists.

According to Gallup, the fact that data security and confidentiality are not major concerns of millennials could help to explain why that group are so much more likely to identify as LGBT when compared with other generations.