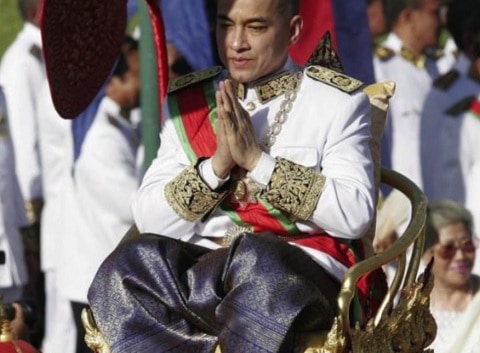 General Khieu Sopheak, spokesman for the Cambodian Ministry of Interior said “We have got orders to arrest them. If we don’t take action against them,” he added, “more people might follow their act.”

While Thailand explicitly outlaws criticism of its monarchy, Sihamoni is not shielded by a specific lese majeste law. However, Cambodia’s constitution describes the king as “inviolable”.

The Cambodia Daily reports that Sam Chankea, spokesman and senior investigator for activist group Adhoc, claimed the altered image was a symptom of a general moral decline in Cambodian society. He blamed this decline in part on the conduct of the country’s political leaders.

“Morality, I think, should start with the high-ranking government officials, and the normal people will follow them,” he said.

Cambodia’s monarchs once enjoyed a semi-divine status. However, the role is now mostly ceremonial. An accomplished linguist, the unmarried Sihamoni spent much if his life pursuing a career in classical dance before his ascension to the throne.

Two of the suspects are thought to be in Cambodia while the third is likely in Thailand.

Watch a NewsBeat report below.