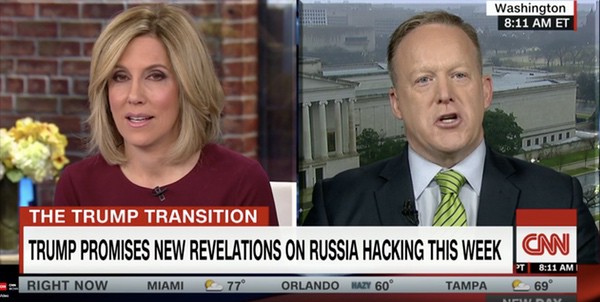 The DNC followed up Spicer’s appearances with an email calling out his lies about the Russian hacks and calling Spicer a “shill” for Putin.

“Business as usual is over. There’s a new sheriff in town, and he’s going to do things first and foremost for the American people. Absolutely you’re going to see Twitter. The fact of the matter is that when he tweets he gets results. So whether it’s Twitter, holding a news conference, picking up the phone, having a meeting, he is going to make sure that he continues to fight for the American people every single day.”

.@seanspicer on Trump’s use of Twitter: “The fact of the matter is that when he tweets he gets results.” #ThisWeek pic.twitter.com/L4C506T1Qx

Spicer also tried to turn a question about the Russian hacks into a condemnation of Hillary Clinton:

“Why aren’t we talking about the other influences on the election? Why aren’t we talking about Hillary Clinton getting debate questions ahead of time? No one is asking those questions. The fact is that everyone wants to make Donald Trump admit to certain things. When do we talk about the other side, which is what did Hillary Clinton do to influence the election? Is she being punished?”

And Spicer got a grilling from CNN New Day’s Alisyn Camerota:

Camerota continued to question Spicer on the level of information Trump has received so far from the intelligence community. “He has not been briefed about the heads of the intelligence community about whether or not they believe Russia is behind the hacking?” she asked. Spicer said he had not but that officials were set to brief Trump later in the week, once the report was finalized. “The idea we’re asking people and making assumptions on a report that’s not final is unbelievable,” he added.

Later in the exchange, Spicer also took a shot at Camerota, suggesting she was unable to see the good sense in Trump’s approach to the alleged hacks. “I know this frustrating for you that we’re doing it in a logical way,” Spicer said. “No, we’re going to get all the information, get briefed properly and then make a decision. We’re not going to put the cart before the horse.”

.@seanspicer: "Irresponsible" for Obama to act on intel report on alleged Russian hacking as it is not yet final https://t.co/lPWONBiTwk

“Right on cue, Trump’s incoming White House press secretary was on the morning shows today spinning the falsehood that there is ‘zero evidence’ that Russia influenced the election through their hacking of DNC and Clinton campaign officials,” the DNC email stated.