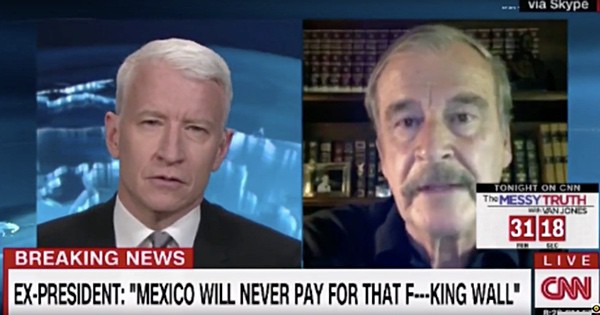 Mexico’s president Enrique Peña Nieto is under pressure to cancel a trip to Washington following Donald Trump’s executive order to start plans to build a wall at the Mexican border. Peña Nieto has said Mexicans will not pay for the wall but may still make the trip.

Anderson Cooper spoke last night with former Mexican President Vicente Fox, who again repeated his assertions that Mexicans “will not pay for that f**king wall.”

He added: “Trump is a different thing. He doesn’t seem to be an American. He is a false prophet who is taking that nation into the desert.”

UPDATE: This morning, Trump threatened to cancel the meeting with Mexico’s president if they won’t pay for the wall: