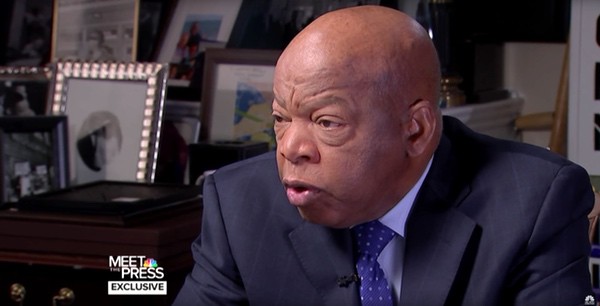 Donald Trump attacked civil rights icon Rep. John Lewis (D-GA) on Saturday morning following an NBC News interview in which Lewis said he wouldn’t be attending the inauguration because he doesn’t consider Trump a legitimate president and believes his election was a “conspiracy” on the part of the Russians.

“I don’t see the president-elect as a legitimate president. I think the Russians participated in helping this man get elected. And they helped destroy the candidacy of Hillary Clinton. I don’t plan to attend the inauguration. It would be the first one that I’ll miss since I’ve been in Congress.

“You cannot be at home with something that you feel is wrong. I think there was a conspiracy on the part of the Russians and others that helped him get elected. That’s not right. That’s not fair. That’s not the open democratic process.”

Lawmakers quickly came to the defense of Lewis:

Ahead of #MLKday2017, let us remember that many have tried to silence @repjohnlewis over the years. All have failed.

John Lewis is an icon of the Civil Rights Movement who is fearless in the pursuit of justice and equality. He deserves better than this. https://t.co/WX1QDCKfzP

.@realDonaldTrump: This is not talk. @repjohnlewis is an American hero. pic.twitter.com/UNQAWjVwhC

John Lewis and his "talk" have changed the world.https://t.co/qeUloAkeTx https://t.co/aH2vDLjKk9

.@repjohnlewis is a hero and I'm lucky to call him a colleague. You sir are not half the man he is. @realDonaldTrump https://t.co/f7VwPYQNiz

.@repjohnlewis is a hero who has given his life to equal rights. He's been locked up, beaten up, spit on and still never lost his fight

.@realDonaldTrump stands with V. Putin. I stand with @repjohnlewis.

Is this really happening? The incoming President is attacking an American civil rights icon during Martin Luther King Jr. weekend?

Here's a tip: Instead of attacking civil rights icons like John Lewis, reach out to all the Americans feeling threatened by your presidency. https://t.co/BjRfOAUIgX