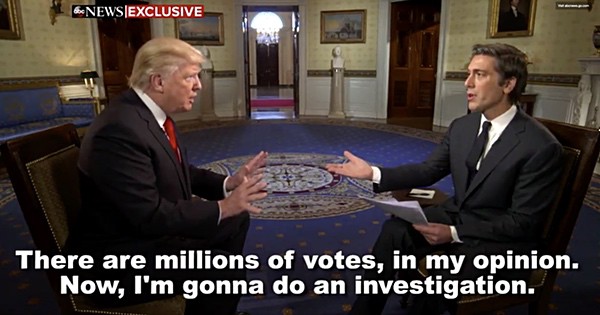 Donald Trump will use his bogus voter fraud claims to launch an investigation that will then be used to justify voter suppression, say political leaders and journalists, including John Bussey from the Wall Street Journal and Ari Berman of The Nation.

The great political crisis we face is not voter fraud, which barely exists. It's voter suppression and the denial of voting rights.

FOX News anchor Shep Smith made note of it in a newscast today calling out Trump’s blatant lies about fraud:

“John Bussey from the Wall Street Journal suggests that the big picture is here, start an investigation, find some incidents here, there, and yon of voter fraud, get people whipped up, and then put in rules to suppress the vote across the country, a pattern that we’ve seen in state after state over the past four or five years.”

And check out the interview Trump did with ABC News anchor David Muir, in which Muir questions Trump about his claims, and the Pew report that Trump holds up as evidence.

When presented with the fact that the Pew report Trump is holding up so far has been “debunked,” that Muir called its author who told him that “they found no evidence of voter fraud,” Trump then attacks the author in an attempt to discredit:

President Trump to launch investigation into alleged voter fraud: “I want the voting process to be legitimate." https://t.co/zjjJ6vMqXU pic.twitter.com/Spb3a9ScQf

Trump then says they’ll be pursuing an investigation into people registered who are “dead, illegal and two states, and some cases maybe three states.”

Incidentally, both Trump’s senior advisor Steve Bannon and his daughter Tiffany Trump are registered to vote in two states.