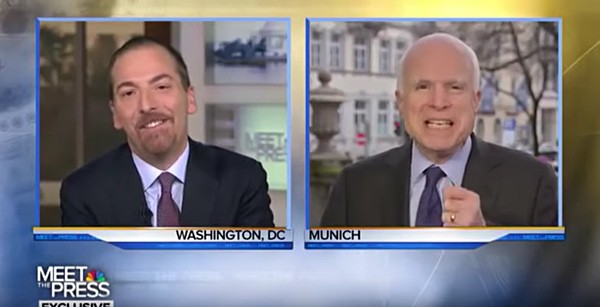 Asked by Meet the Press host Chuck Todd to react to Donald Trump’s tweet attacking the media as the “enemy of the American people,” Senator John McCain (R-AZ) warned that those kinds of attacks are the start of fascist suppression.

The FAKE NEWS media (failing @nytimes, @NBCNews, @ABC, @CBS, @CNN) is not my enemy, it is the enemy of the American People!

“A fundamental part of that new world order was a free press. I HATE the press. I hate you, especially. But the fact is, we NEED you. We need a free press. We must have it. It’s vital. If you want to preserve democracy as we know it you have to have a free and at many times adversarial press. Without it I’m afraid that we would lose so much of our individual liberties over time. That’s how dictators get started.”