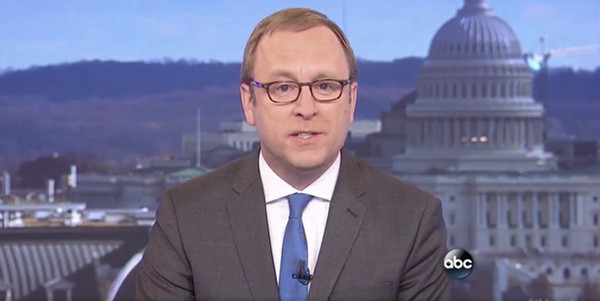 In a closing monologue on This Week, Jonathan Karl laid into Donald Trump for his tweet attacking the “fake news media” and calling it an enemy of the American people, explaining that criticism of the press has a long and storied history involving U.S. presidents.

.@jonkarl: "A free press isn't the enemy of America; it's a big part of what makes America great." https://t.co/eyyCqFk5ZG #ThisWeek pic.twitter.com/BTV8JRNcXu

There’s been no shortage of outrage over the president’s statements on the press. But I’d like to close with a little perspective. There is nothing new about a President of the United States criticizing or even vilifying the press. Even Thomas Jefferson, the same Thomas Jefferson who wrote the Declaration of Independence and who, ten years after that, wrote, “Our liberty depends on freedom of the press” — even Thomas Jefferson, when he was a few years into his own presidency, was so upset about what was being written about his administration that he flatly declared, “Nothing can now be believed that is seen in a newspaper.”

Teddy Roosevelt, who now is next to Jefferson on Mt. Rushmore, once wrote, “To announce there must be no criticism of the president or that we are to stand with the president, right or wrong, is not only unpatriotic and servile, but is morally treasonable to the American public.”

I couldn’t agree more. But I also know that T.R. wrote that nearly a decade after he left office. When he was still in the White House, he coined the term “muckrakers” to denounce investigative journalists who he felt were so obsessed with the negative that they were missing the good in the world, including the good he was doing as president. Such negativity in the press, Roosevelt said, is one of the most potent forms of evil.

And that brings me to President Donald Trump, who has taken presidential criticism of the news media to yet another level. In a way, it surprised me. The Donald Trump I knew as a young reporter in New York was nothing if not media friendly. And for most of the past Republican primary, he was the most accessible major candidate. No one else was close.

At Thursday’s press conference, we saw flashes of that — seventeen reporters called on, many that he knew would ask tough questions. But now the president has declared the press the enemy of the American people.

I’ve reported in countries where leaders not only complain about a critical press, but also try to shut it down, throwing reporters in prison or worse. I’ve seen my colleagues risk their lives and, with increasing frequency, lose their lives in their pursuit of the truth. We are not about to stop doing our jobs because yet another president is unhappy with what he reads or hears or sees on TV news. There is a reason the founders put freedom of the press in the very first amendment to the Constitution.

As long as American democracy remains healthy, there will be reporters willing to pursue the truth, even if that means incurring the wrath of the most powerful person in the world. A free press isn’t the enemy of America; it’s a big part of why makes America great.

Previous Post: « Chris Wallace Rips Reince Priebus Over Trump’s Attacks on Media: ‘You Don’t Get to Tell Us What to Do’ – WATCH
Next Post: John McCain Blasts Trump’s Attacks on the Media: ‘That’s How Dictators Get Started’ – WATCH »