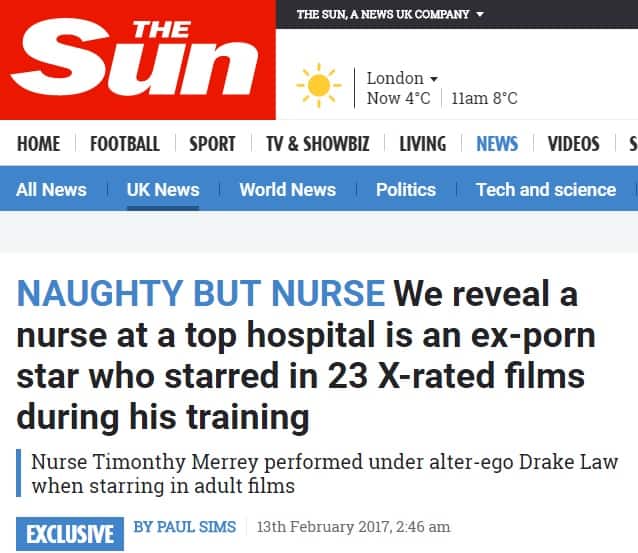 Scurrilous tabloid rag The Sun has followed past form by publicly outing a newly-qualified nurse as a former gay adult film star for the pure fun of it.

The paper, which has been boycotted in Liverpool since 1989, has a murky history of brewing up homophobic hatred. In the 1980s, the excuse for journalism was apoplectic at the notion that BBC soap Eastenders added two gay characters to its cast.

“EastEnders is turning into “EastBenders”…with two gays joining the soap’s line up.”

In 1989, The Sun reported that the soap was to air “A homosexual love scene between two yuppie poofs…”

In their latest muckraking “expose,” yesterday The Sun published a story with the headline “Naughty but nurse: We reveal a nurse at a top hospital is an ex-porn star who starred in 23 X-rated films during his training.”

The article publishes the nurse’s name and age, a photo and the hospital where he works.

One of the newspaper’s Eastbenders targets, actor Michael Cashman – a co-founder of Stonewall – tweeted “Never forget the history of the Sun: threw peoples lives into the mill & with prejudice and misinformation ground them to pulp.”

Never forget the history of the Sun: threw peoples lives into the mill & with prejudice and misinformation ground them to pulp. #forgetnot https://t.co/taCeuJ6sFZ

The tabloid claims some of the adult films in which the man starred were released as he came to the end of a degree in nursing in February last year.

With an annual nursing degree starting from £9,250, as well as requirements for mandatory volunteer work, an excess of money isn’t something many nursing students have.

It appears there had been no complaints from patients or staff about the nurse’s former profession, as they were unaware of his background until The Sun chose to investigate the ‘story’.

The paper quoted a ‘source’ who said: “No one at the hospital knew of his background. He’s only just got the job.”

Although the young man has denied the report, The Sun made sure to splash his face all over the article.

As well as publishing images taken from the man’s supposed adult films, the tabloid appears to have sent photographers to the man’s home to take undercover photos of him taking out the bins.

There is no explanation in the article as to how the man’s alleged work in the adult industry is in the public interest, or affects his ability to provide care for sick and injured patients.

The paper says the man is “understood to have confessed to hospital bosses” who have declined to comment on the case.

The unnamed source also went on to say: “He’s told bosses it’s behind him and he is no longer a performer.

“He insists it has no bearing on what he does as a nurse.”

According to The Sun, the hospital in question has had the grace to not respond to a request for comment.

Reader reactions to the story have been universally negative. 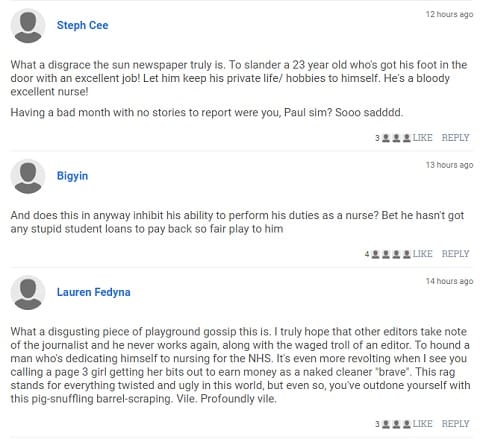 UPDATE: The Sun has removed the article from its website.