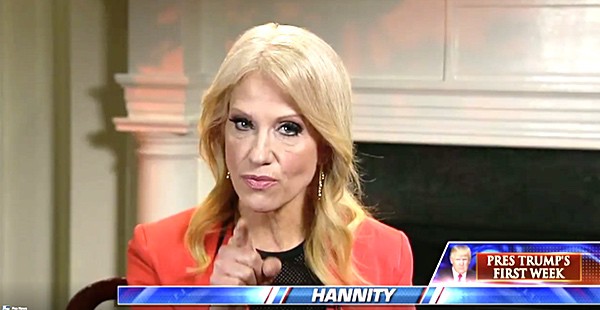 Trump spokeswoman Kellyanne Conway denied that she has been sidelined for making statements that are at odds with the administration’s official stance.

Conway appeared on Fox News last night but had not given an interview on tv since Monday of last week.

In that interview, she said that former National Security Adviser Michael Flynn had Trump’s “full confidence” just hours before he was given the presidential heave-ho. The following day, Conway said Flynn had offered to resign. However, White House Press Secretary Sean Spicer said Trump had asked Flynn for his resignation.

According to CNN, those statements led Trump and his top advisers to conclude that her appearances were doing more harm than good for the administration.

RELATED: Kellyanne Conway: ‘I Don’t Know Who’ Tweeted ‘Love You Back’ to a White Supremacist from My Account

Speaking to CNN, Conway denied that she has been sidelined, claiming instead that she is “trying to focus on other pieces of my portfolio.” She added said that Trump is his own best “communicator and connector” and did not need her to be a constant presence on television. “None of us do it like he does,” she helpfully noted.

“Kellyanne has a number of media appearances this week and also has a large portfolio at the WH and is spending significant time focusing on it,” said Sanders.

However, sources said the Trump administration is “enjoying a reprieve from the controversy created by her appearances.”

“Trump was using her as an effective surrogate, then she started becoming ineffective,” said one source, “so they’re letting the heat cool off.”