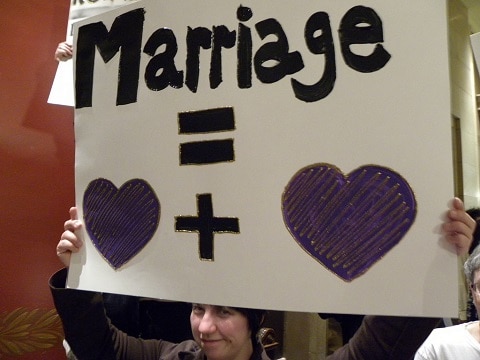 A link has been found between the legalization of gay marriage and a drop in the suicide rates of LGBT teenagers.

A study compiled by researchers from John Hopkins University, Harvard University and Boston Children’s Hospital and published this week in the journal Jama Pediatrics has determined that in US states where marriage equality was passed, the suicide rate among LGBT teenagers fell around 14%:

Julia Raifman, co-author of the research from Johns Hopkins University, said she hoped the research would help to draw wider attention to the scale of the issue among sexual minorities. “I would hope that policymakers and the public would consider the potential health implications of laws and policies affecting LGBT rights,” she added.

According to the US Centers for Disease Control and Prevention (CDC), suicide is the second leading cause of death for those aged between 15 and 24, with suicide rates much higher among those who identify as sexual minorities than heterosexual students.

“This study was really motivated by evidence that there are large disparities across domains of health that affect LGBT adolescents,” said Raifman. “I was interested in whether larger structural issues were potentially leading to those disparities.”

The study made use of data from a long-running program run by the CDC known as the Youth Risk Behavior Surveillance System, which is collected on a biannual basis:

The team analysed figures from more than 760,000 students collected between 1999 and 2015, with data for states that passed a same-sex marriage law examined before and after the event – an approach, the researchers say, that took into account a host of differences existing between the states.

LGBT advocates and researchers said that the connection, although still tentative, made sense:

Ellen Kahn, director of the Children, Youth and Families Program at the Human Rights Campaign, said that the connection between mental health in young people and the social and political environment made sense. “When LGBTQ young people don’t feel safe, protected, or valued in their own community, when they don’t feel they can be fully out and authentic – that adds an emotional burden to bear,” she said.

This helps to explain how civil rights gains such as marriage equality have a knock-on effect on wider spheres of life beyond just those couples who do marry, although their positive outcomes by themselves are significant. Marriage equality is emblematic of broader societal acceptance as well as aspirational on a personal basis. This is why any attempts to roll back these gains should meet with resistance.