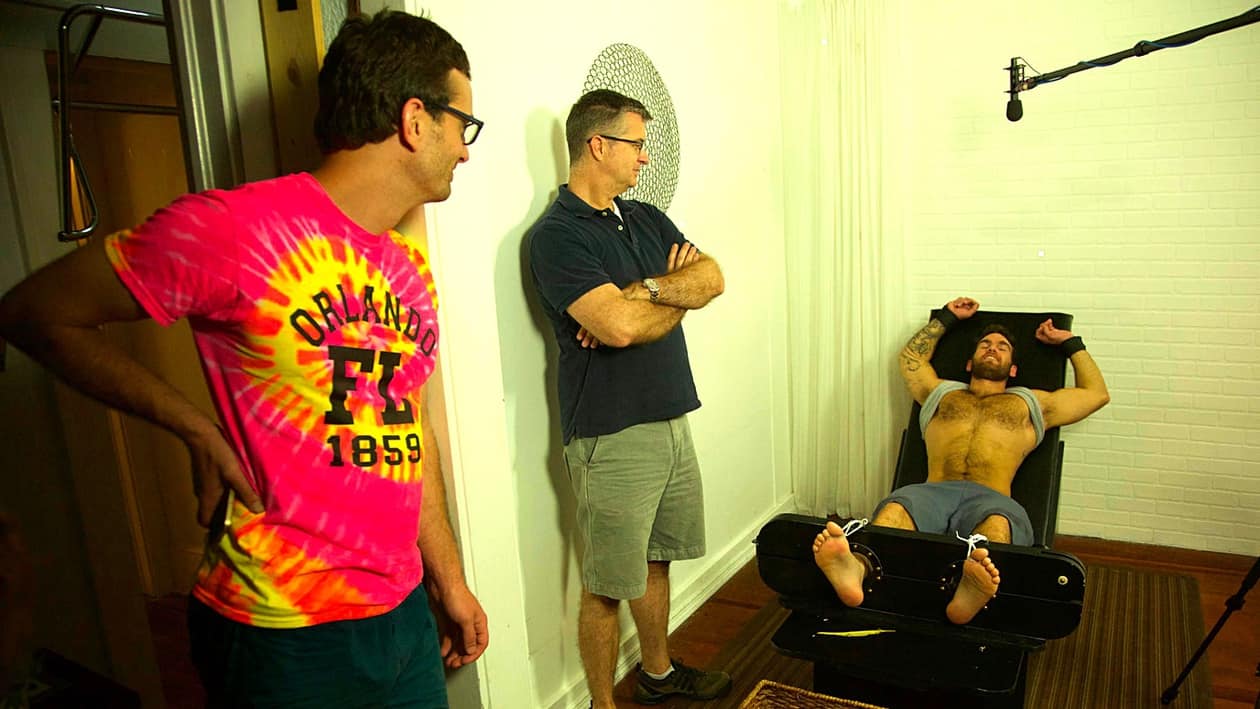 It’s no secret the internet is a strange place, but there are few recesses of the web more bizarre than the world of competitive endurance tickling — and not just for the reasons you might assume.

The documentary Tickled may have started as a curious look at another unusual sexual kink, but the resulting work is less about fetish and more about the money, harassment and legal positioning behind one of the largest purveyors of tickling videos.

When New Zealand filmmaker David Farrier began his outreach to Jane O’Brien Media, he was immediately met with hostility. The initial response aggressively asserted their objection to associating with a homosexual journalist. (Farrier identifies as bisexual.) The ensuing search for the powers behind Jane O’Brien truly must be seen to be believed, uncovering a 20-year-plus history of exploitation, manipulation and even “tickle cells” that recruit men throughout the country.

The film premieres on HBO and its streaming platforms tonight at 10 p.m. Eastern. The film has drawn so much ire from Jane O’Brien Media and the other associates featured in the film, it’s necessitated a short follow-up doc, The Tickle King, which will exclusively debut  tonight on HBO Now, HBO Go, HBO On Demand and affiliate portals.

I’m not the first person to make the connection, but I couldn’t help but notice the parallels here to Scientology.

It’s almost comically similar in their reaction to everything, whether it’s turning up to screenings, protesting websites, getting on Twitter. After Sundance, Kevin [Clarke, a Jane O’Brien Media associate] was tweeting journalists directly telling them that what they just watched was full of lies. Scientology parallels it pretty close.

It also feels like part of this bigger “fake news” discrediting culture.

Oh, totally! All this stuff happening in America at the moment resonates, I think, with Tickled, even though that wasn’t happening when we made the film. Donald Trump is President, and he is someone who I see as a bit of a bully. He harasses people on Twitter. He sues people. And this is all the behavior from Tickled. And then the whole fake news things. There is fake news, and then you’ve got President Trump coming in and co-opting that fake news thing to shut down the real news. It’s all this misinformation flying around. And that’s what we experience with the fallout to Tickled, this whole idea of the film being full of lies and being fake and ‘this is the truth is over here’ and ‘don’t look there, look here.’ It’s kind of mad.

That sort of cuts right to what this film is really about, because it’s not just a film about competitive tickling.

I think a documentary about tickling and the tickling fetish would be interesting and entertaining for about a half an hour. But beyond that, it wouldn’t be. And this very quickly becomes something that happens to be about tickling, but it’s not about tickling. It’s about power and control and harassment and all those things. 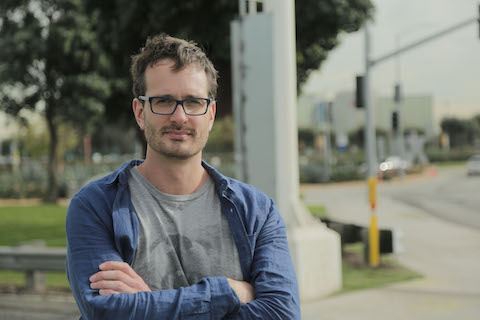 When you first learned about competitive tickling, what is the story you thought you were going to tell?

I just thought it was a weird, quirky, extreme sport that someone came up with. I thought it was like another ultimate frisbee. Just some rich person’s idea of a sport. I just remember sitting in the newsroom in New Zealand, watching these very surreal tickling videos.

I was sitting in the sports department at the time for some reason, and I was showing the sports guys these tickling videos. And we’re all just crowded around the screen and just couldn’t believe what we were watching. They were unsettling, they were strange. The production values were quite high, like it was shot in high-def. They were long, like a half an hour. They’re in Adidas sportswear, and Adidas isn’t cheap. It’s like what is happening?

I just remember being dumbfounded by it and just immediately started emailing and posting on their Facebook wall trying to get someone to talk about it.

Did you also realize there was a sexual fetish aspect to this right away?

Of course there was much more to it. There were so many red flags along the way, but what was the moment when you knew there was something much bigger at play?

When they flew three people from New York to Auckland, New Zealand to tell us specifically not to make the movie. By that point we had launched a Kickstarter campaign. When they flew in, that’s when we knew we had to make a film, it was obvious. Before that, when they hired an attorney in New York and New Zealand to write us letters, that was another red flag. But flying people physically to us was the big one. 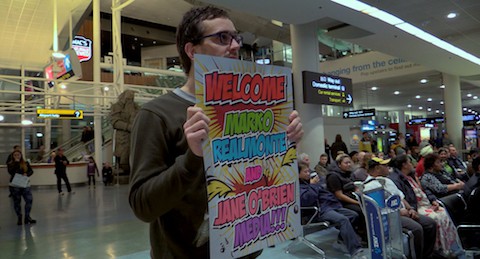 That was a pretty provocative first meeting. I feel like there are points in this when it’s tense as a viewer to watch. Were there parts of filming when you were afraid?

Something for a New Zealander coming to America, I think I’m always paranoid that everyone will have a gun, because guns are big here. We were shooting in Florida and Missouri, and we’re in New York, and we’re in California. Each state felt a little dangerous for a different reason, in a way. Certainly approaching people in the street who didn’t want to be approached, we’re always very aware that things can turn darker quickly.

Other than that, I guess the main concern was just this constant fear of being sued more or coming under more legal threats. When we were filming, we were just super aware that we couldn’t trespass, we could’t do anything wrong. We had to be careful when we would record phone conversations, because in some states you’re allowed to record phone conversations, in some states you aren’t.

So we just had to be hyper aware of that, because we knew we were dealing with a company, like Scientology, that had more resources than us and could come after us, so we just didn’t want to make any obvious, silly mistakes.

One scene I found really interesting was the one with Richard Ivey. The way that scene is shot, it gets an aesthetic shift. It’s slowed down and eroticized a bit. What was your intent presenting that scene in that way?

We did that again later when it came to shooting the MMA fighting, because we learned later in the film there was a tickling cell — tickle cell is such a weird term — in this MMA community. You can see the parallels between this hyper-masculine sport of MMA, where everyone is just all over each other and then tickling eroticism. There are similarities there. With Richard, it was mainly to put you in his head and see tickling like you hadn’t seen tickling before.

Did you find commonalities between the guys targeted for these tickle videos?

Absolutely. Most of the people that get involved in competitive tickling, they’re poor, they’re straight and they usually come from some kind of conservative background. That just seems to tie in to the next level of what we found, which is these tickling videos, once people are on tape, that’s used against them later down the line.

If you had an out and proud gay man with an accepting family and friends in these videos, all that harassment wouldn’t work. The reason it works is because, for these guys, being seen as being gay is a problem, and that’s what’s preyed upon. The people that get involved in competitive tickling are picked, I believe, very specifically.

It seems to me that part of the game is how do you get straight men to tickle each other? You make it a sport. Then it’s not gay, and it’s acceptable. That’s how everyone is drawn in. I think that’s part of the kink, so to speak.

Do you see any other parallels between what you uncovered in Tickled and the larger adult industry?

Richard Ivey, the good tickler, is an example of someone who is very clear about what the payment is, what the videos are for, how long are you going to work for, he’s got a safe work environment. He takes that very seriously and very personally. I think some pornography is hopefully like that. You get the other side, which is an industry that preys on people that want fame or success or money. Part of what you get with competitive tickling is you get to take some headshots to take home. Part of the deal is you get a portfolio of beautiful modeling shots.

What have been some of the most surprising responses you’ve received to the film?

The other thing has been meeting people involved with Jane O’Brien media. This is a story that stretches back 20 years. The harassment has been going on for about 20 years. People have come to the film not knowing what it’s about and gone ‘Oh god, that’s happened to me 15 years ago!’ They come with this specific story, and that’s been really fascinating.

What do you hope is the lasting impact of the film?

I hope at some point that the authorities perhaps take action and look at stopping this ongoing harassment. I hope that happens. And I hope people watch it and are aware that you can still be tricked on the internet. I think a lot of people who grew up with the internet think they know it all. But there are still ways you can be tricked.

I hope that, it sounds too grand, but I hope that people watch it and just feel angry at this system we’re in at the moment, where the rich and powerful can completely shit all over the poor and powerless. .. And at the very simplest, I hope it’s a warning for people thinking of taking part in a competitive tickling competition. They can watch this and go, ‘Oh maybe I should think twice about doing this.’