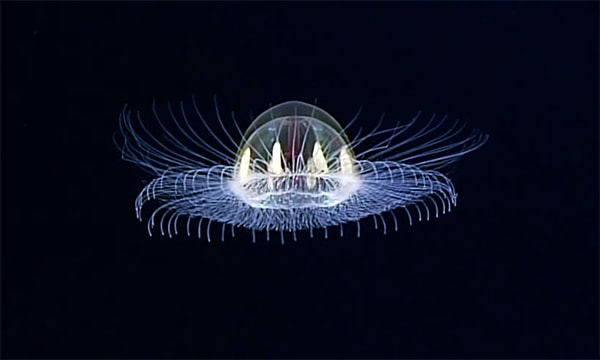 Marine researchers at work in the South Pacific have shared new footage of a distinctive, flying-saucer-like golden jellyfish at ocean depths of around 3,000 meters, or nearly 2 miles.

Scientists aboard the National Oceanic and Atmospheric Administration’s Okeanos Explorer were charting the newly-named “Utu” Seamount in the National Marine Sanctuary of American Samoa when they came across this preternatural specimen.

The jelly (hydromedusa) is in a family of hydromedusae called Rhopalonematidae, which is known for the canals running vertically on the inside of the bell, gonads attached to these canals, and sometimes having two sets of tentacles.