LOGAN, the latest and last (for now) solo Wolverine movie, was not kidding around when it opted for Johnny Cash’s “Hurt” as its trailer music. It’s not just the severity of the title, but the elegiac lyrics, and the dying man as guiding spirit / inspiration. Some trailers lie but this one spoke world-weary truth. This is exactly the kind of movie James Mangold, who also directed the Johnny Cash biopic Walk the Line, delivers.

Wolverine’s mutation were never those iconic claws, which were a science experiment to weaponize him, but his ability to instantly heal which also slows down his aging process. The movie franchise got very silly about this, placing him in the civil war context in X-Men Origins as if the once feral Canadian hero was an immortal vampire rather than a mutant.

But Logan is anything but silly about aging. That is wise since this franchise is long in the tooth. What’s more Hugh Jackman does age as he is not, alas, a mutant — unless you count bonafide movie star charisma as a superpower, which: fair point! 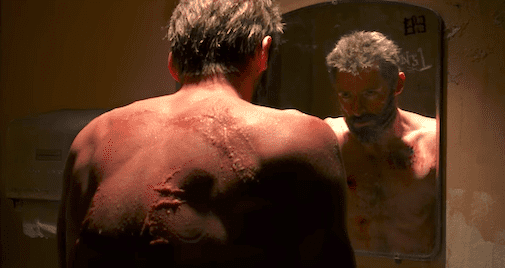 So Logan hits Jackman with harsh light, exposes the wrinkles, grays the hair, and piles on the scarring and ‘seen better days’ makeup. Logan jumps ahead to the future of 2029 in which everything in the US has gone to total shit (this seems less like science fiction than probability given Trump’s America) and our world, particular for mutants, is unforgiving like a dystopian western. Logan is not healing quickly like he used to and is hiding decrepit Charles Xavier (Patrick Stewart) from authorities.

At first Logan doesn’t believe his former Professor that young mutants exist again (the movie is thankfully low on backstory, expecting you to imagine things that came between the films). But soon our familiar heroes are on the run with a mute young girl who is suspiciously like Wolverine himself, complete with claws and murderous rampages.

The story of Logan is actually fairly clever, dropping us into a plausible dystopia and shoving our faces in terrifying ‘What If?’ scenarios, which stack on top of each other like a Jenga tower ruled by Murphy’s Law. What, for example, would happen if the world’s most powerful psychic mind was experiencing mental deterioration and his seizures could incapacitate and even kill everyone around him? The film’s best action sequence, in which Wolverine has to agonizingly make his way through a crowded hotel and soldiers before Xavier accidentally kills everyone, is terrifying and superbly executed.

One of the film’s boldest moves, and its only arguable nod to “fun” is a meta riff on comic lore and superhero movies. Old X-Men comic books come into the plot and Logan has nothing but disdain for them, writing off superhero stories as escapist fantasy. Despite impressively smart elements like this, the movie falls into many usual traps of the genre: the villain is unsatisfying and ill-defined despite Boyd Holbrook trying his damnedest to zjoosh his role up on charisma alone; there are sacrificial characters of color (sigh) – why must black characters always die in genre films?; and the action scenes become repetitive.

About those action scenes…

It doesn’t take long to realize that Mangold and team are as thirsty for blood baths as Countess Báthory and are going for the hardest of possible “R” ratings from the MPAA. Gone are the days when the X-Men movies pretended that Wolverine wasn’t a mass murderer (he doesn’t even try to leave survivors in any action situation now). This is the first X-Men movie in which people have arteries. There will be (lots of) bloodletting. 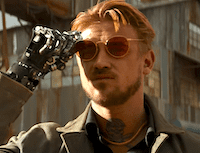 If the violence wasn’t enough to ensure critical favor for the film’s “seriousness,” Logan and Xavier both use “F**k!” in seemingly every other sentence as if to proclaim that they’re inside a very serious IMPORTANT movie for adults. The “R” seems to be winning unanimous praise from critics but I can’t personally hop on this bandwagon. Brutality, like any other noun, is not qualitative. It cannot make any work of art serious or important. It can only make it brutal.

I don’t have children but weirdly I’ve never felt older while watching a movie. You can say all you like, as people have to me when I’ve expressed this concern, that “this movie isn’t for kids!” but tell that to the hordes of children who love superheroes and will surely find a way to see it themselves. I literally have never seen a movie this violent that wasn’t part of the slasher genre and I see a lot of movies.

All that said, Logan is not just the latest but the greatest Wolverine movie. Sure, sure, the bar was very low after the appallingly joyless X-Men Origins: Wolverine and better but disposable follow-up The Wolverine but that’s still good news. A quick look around at early reviews suggests that Mangold has made a masterpiece. Like so many things connected to the world’s current favorite movie genre, this is more hype than reality. Still, even if the movie doesn’t live up to the fannish excitement, it is wonderful that Hugh Jackman got a swan song worth his time as he says goodbye to the character he’s played for nearly his entire career. For all of its flaws, this sometimes inspired hellish neo-Western is worth seeing (for those with strong stomachs).

There won’t be a sing-a-long version of Logan (that wouldn’t be sober and important enough!) but there should be:

Freed finally from those Adamantium claws, we can only hope that the next act of Jackman’s career will make up for lost time and allow him to explore his range as an actor. He’ll embrace his song and dance side in The Greatest Showman this Christmas and let’s hope for a comedy and a romantic drama follow on its heels. There’s more to movie life than superheroes and berserker rages. In other words: RIP Wolverine but long live Hugh Jackman.

Previous Post: « Sen. Coons: The FBI Has Transcripts That ‘Provide Critical Insights’ into Whether Trump Colluded with Russia – WATCH
Next Post: Recording Artist and Music Exec Tommy Page Dead at 46 of Apparent Suicide »