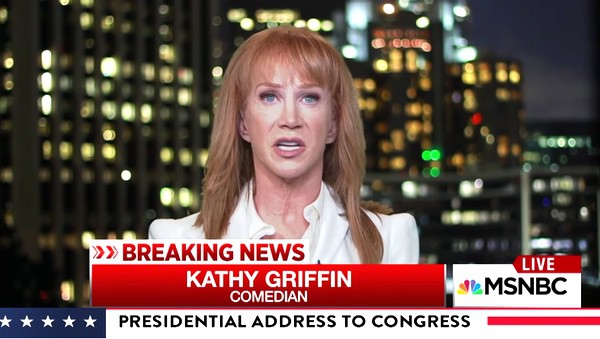 Kathy Griffin joined Chris Matthews on Hardball and had a few less swooning thoughts about Trump’s speech to Congress.

“What an idiot. We gotta watch this idiot for an hour and nine minutes? He just says one hateful thing after the other. He’s so embarrassing. Just from the beginning, you know, Melania comes in with the sequin jacket and all the white guys are like ‘hey she’s hot, maybe if I’m like him I could get her.’ The whole sham from the beginning.”

Speaking seriously about her time with working with Trumps, Griffin didn’t feel the same as Van Jones did about Trump’s moment addressing the widow of William “Ryan” Owens:

“I thought that moment of pointing out the widow it was exploiting her grief a little bit. As you know those ceremonies are very, very serious. And I feel like this is a president who doesn’t take anything seriously.”

Griffin also had something to say about Trump’s wall:

“We actually would like to keep the Mexicans. I would like to stand on the wall and throw Mexicans into the United States if I could.”

“I’m a big resister and I don’t believe in compromise with this president. I also think he’s crazy, I think he’s mentally ill. He’s also an idiot.”

Griffin then brought up the 25th amendment, which reads:

“Don’t act like he doesn’t say crazy stuff. He turned to me one time at one of these Larry King birthday parties…and he goes ‘so, you’re a female comedian.’ Like he’s that guy. ‘You’re a female comedian.’ I go, ‘yeah, next thing you know we’re gonna want to vote.’ And then he asks me, ‘how much do you make?’ And I go ‘how much do you make?’ And he goes ‘a billion dollars.’ And I go ‘me too.'”