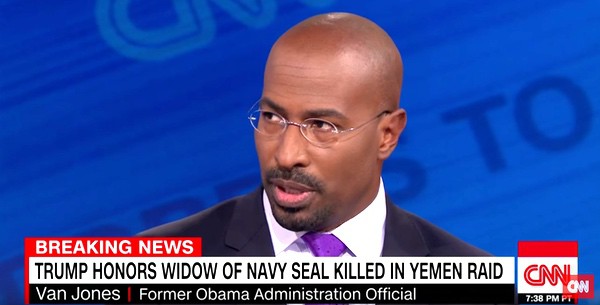 CNN pundit Van Jones swooned over Donald Trump’s nod to the widow of fallen Navy SEAL William “Ryan” Owens, saying that if Trump cans that moment and learns to repeat it, he’ll be in office for eight years.

“He became President of the United States in that moment. Period. There are a lot of people who have a lot of reason to be frustrated with him, to be fearful of him, to be mad at him, but that was one of the most extraordinary moments you have eveer seen in American politics, period. And he did something extraordinary, and for people who have been hoping that he would become unifying, hoping that he might find some way to become presidential, they should be happy with that moment.

“For people who have been hoping that maybe he would remain a divisive cartoon, which he often finds a way to do, they should become a little worried tonight.”