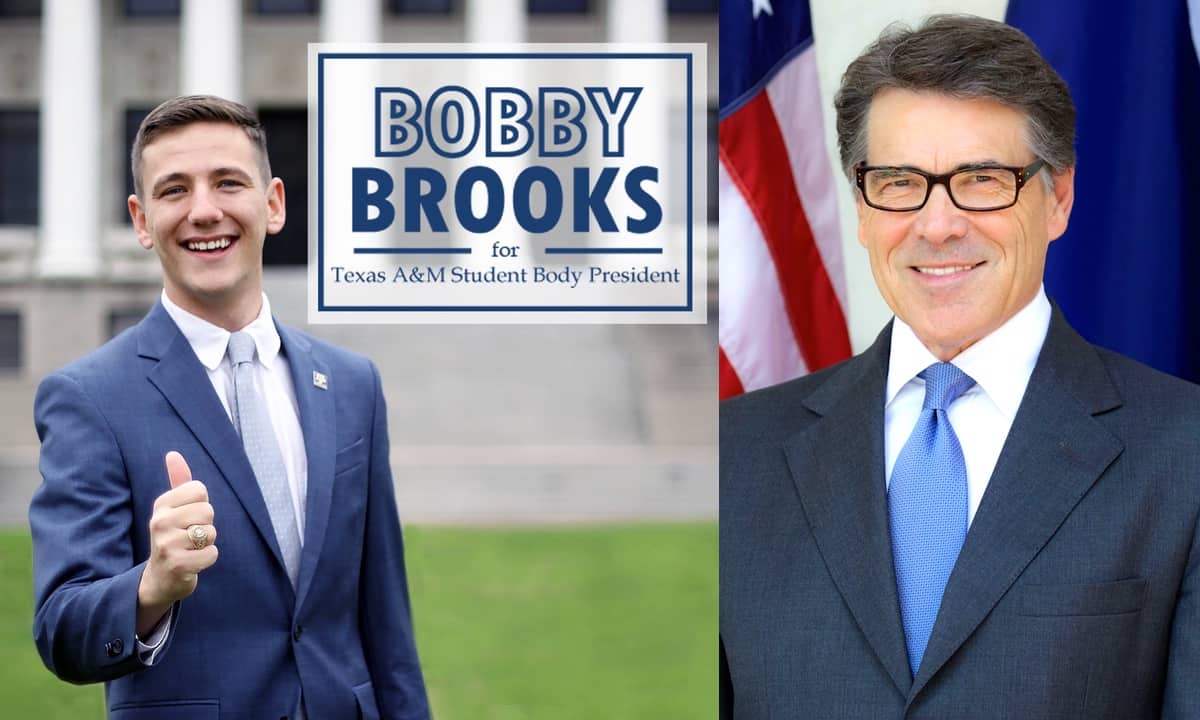 Perry, the country’s current energy secretary chose to plunge into campus politics, claiming publicly that Brooks stole the election from another student.

That student, Robert McIntosh, is the son of a prominent Republican fundraiser in Dallas who campaigned for Trump during his presidential election.

Perry’s accusation drew astounded responses from the university, Texas lawmakers and a professor, who said it was “extraordinary” that a federal official would involve himself in an issue as hyperlocal as student government elections.

Perry’s charge came in the form of an op-ed for the Houston Chronicle. Wrote Perry:

As Texas’ first Aggie governor and as someone who was twice elected Yell Leader of Texas A&M University, I am deeply troubled by the recent conduct of A&M’s administration and Student Government Association (SGA) during the Aggie student-body president elections for 2017-2018.

When I first read that our student body had elected an openly gay man, Bobby Brooks, for president of the student body, I viewed it as a testament to the Aggie character. I was proud of our students because the election appeared to demonstrate a commitment to treating every student equally, judging on character rather than on personal characteristics.

In an extraordinary submission to the Houston Chronicle’s Editorial Board, the energy secretary also suggested that Bobby Brooks’ victory was engineered by the Student Government Association in a quest for diversity on the traditionally conservative campus.

Brooks was declared the winner in the campus election by the SGA even though he came in second in the vote count to Robert McIntosh , who is white and was disqualified by student election officials.

McIntosh was disqualified on charges that he did not provide receipts for glow sticks used in a campaign video. He also faced charges of voter intimidation, which were later dismissed on appeal.

The student body’s Judicial Court, Perry said, “admitted that the charges were minor and technical, but incredibly, chose to uphold the disqualification.”

“The desire of the electorate is overturned, and thousands of student votes are disqualified, because of free glow sticks that appeared for eleven seconds of a months-long campaign,” Perry wrote. “Apparently glow sticks merit the same punishment as voter intimidation.”

Perry then went on to suggest that the outcome would have been different had McIntosh not been a white male.

Perry continued, in his op-ed:

The student Perry argued for, Robert McIntosh, responded in an interview with the school paper, The Battalion:

McIntosh, who is a university studies senior, said he was unaware of Perry’s plans to write a op-ed and appreciates the Secretary’s comments, which he feel gives validity to his cause.

“I’m thankful for Secretary Perry’s support of fairness in the Houston Chronicle today. I did not at all expect his editorial and I’m humbled to have his support,” McIntosh said. “He made a compelling case which I fully support and continue to fight for. Our campaign team won the election and was subsequently disqualified unfairly. Diversity, at it’s heart, is equal treatment of all, and we hope this situation is resolved in a way that ensures a fair and more transparent process now and in future elections.”

And the school responded to Perry:

While Perry is requesting answers from the Board of Regents, A&M faculty play no part and do not interfere with the elections of either members of student government or the position of Yell Leader.

Amy Smith, spokeswoman for Texas A&M, expressed a gratitude for Perry’s desire to remain loyal to Texas A&M, but said the university was not, nor could have been, involved in the decision to disqualify McIntosh.

“We appreciate Secretary Perry’s long-term commitment to his alma mater and to the state in general,” Smith said. “We were surprised that he weighed in on the university student body election and respectfully disagree with his assessment. These elections are run by the students with advisors from student affairs and issues that arise are adjudicated in accordance with the Student Government constitution and by-laws.”

Vice Chancellor of Marketing and Communication for the TAMU System Laylan Copelin referred The Battalion to Smith as well.

Smith went on to indicate that McIntosh was not given unequal treatment because of Brooks’ sexuality as Perry implied.

“The disqualification of the leading vote-getter resulted in the certification of Bobby Brooks as the next Student Body President effective April 21, 2017,” Smith said. “To suggest that the same decision of disqualification would not have been made if the roles were reversed is to deny the Texas A&M of today where accountability applies to all.”