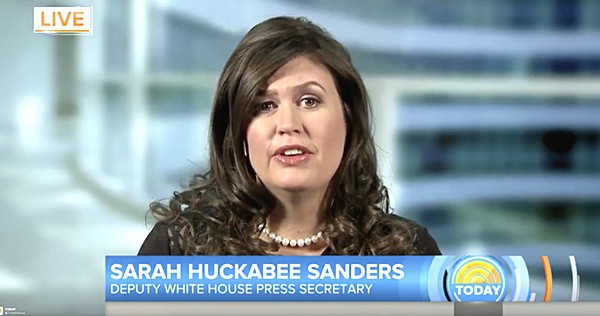 Trump spokesperson Sarah Huckabee Sanders hit the morning shows to try and beat back reaction to Donald Trump’s paranoid, hysterical weekend tweets alleging he was wiretapped along with denials from top officials that it took place.

“The media loves to create this false narrative against the current president but is so quick to dismiss anything under the past administration. If the president walked across the Potomac, the media would report that he couldn’t swim.”

WATCH: “If the president walked across the Potomac, the media would report that he couldn’t swim.” –@SarahHuckabee pic.twitter.com/vOs9gVIHL9

When asked if Trump accepts Comey’s denial that the wiretap happened, Huckabee Sanders replied: “You know, I don’t think that he does.”

Huckabee Sanders then went on to spew a fountain of lies about articles that back up Trump’s assertion of wiretapping, and Stephanopoulos called her out each time.

Huckabee Sanders then trotted out her finely rehearsed Trump walking across the Potomac line.